Forests have been an integral part of human life since ancient times. They have indeed been beneficial to human life. They help bring rain and increase the fertile power of the earth. Forests are capable of preventing flood risk by absorbing rainwater. The forests absorb the water and slowly carry it into the atmosphere. Forests prevent land degradation, help eliminate drought and check the spread of deserts.

As civilization evolved, humans began cutting down trees to meet their needs. Deforestation continued in this way and it had a profound impact on the environment. Today, in the blind race of development in the world, forests are being reduced rapidly due to which the balance of the environment is deteriorating and the threat to the existence of life on earth is increasing.

Forests are a wide area that completely covers trees that improve the overall biological potential of the environment. Trees play a larger role in carrying environmental balance than any other component of nature. They play a silent but preservative role in promoting the useful elements for nurturing life. 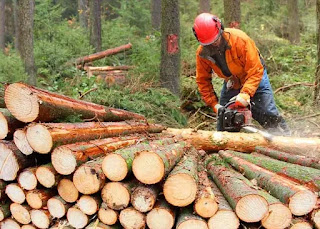 Trees and flora guard us in opposition to worldwide global warming by absorbing excess and harmful carbon dioxide from the environment. In one year, an acre of planted trees absorbs as much carbon as a car produces carbon over a distance of 26,000 miles.

Deforestation occurs when forests are converted into non-forest areas without adequate forests for urbanization, agriculture, and other reasons. This means permanent destruction of forests and forests for domestic, industrial, and mechanical needs. At one time a large part of the Earth was covered with forests, but today its size is decreasing day by day.

Information and facts related to deforestation

Despite various laws and regulations, deforestation continues due to unscientific and unilateral development, population explosion, and growing materialistic culture.

considering the fact that the beginning of agriculture, forests round the world have decreased by 40%. In the last two centuries, three-quarters of the land was cleared to meet agricultural and timber demands.

Apart from this, trees have been harvested for years for development work, residential needs, industries, and mineral exploitation.

Unfortunately, the prevailing model of development relies on the indiscriminate exploitation of resources.

According to environmental experts, human activities have accelerated the decline of nature and have seen a great increase in the last 50 years.

Indiscriminate cutting of trees began to meet the immediate needs of man’s material prosperity and its far-reaching consequences were ignored.

Effect of deforestation on biodiversity

According to World Bank estimates, forests provide habitat for about two-thirds of all species of the earth, and tropical rain forest yields can damage the biodiversity of about 100 species in a day.

According to recent reports by the World Wildlife Fund and the Zoological Society of London, two-thirds of wildlife will end up on Earth by 2020. This report says that the world has seen a drastic decline in the number of wildlife in the last four decades due to the indiscriminate accumulation of forests around the world and increased pollution and climate change.

From 1970 to 2015 the number of wildlife has decreased by 60 percent. Endangered creatures such as elephants and gorillas, vultures, and reptiles are rapidly disappearing. The report estimates that by 2020, wildlife may decline by more than 67 percent.

According to scientists, due to indiscriminate harvesting of trees and climate change, many species can gradually migrate to polar regions or high mountains. If it does, it will have a negative impact on diversity and ecological balance.

This apprehension is not unfounded because climate change is the cause of the extinction of the demons called dinosaurs who ruled the Earth for about 120 million years. If climate change is not taken seriously by not taking steps to stop deforestation, the survival of organisms from the earth is bound to end in the coming years.

Since India has adopted the 8 and 9 percent development model, the nature of human intervention has increased. The process of digging the rivers started as soon as Uttarakhand was formed.

According to the Forest Status Report-2011 released by the Ministry of Environment and Forests, forests and trees are spread over 78.29 lakh hectares of the country which is 23.81 percent of the geographical area of ​​the country while the area of ​​forests should be 33 percent.

After considering the explanatory changes in the area of ​​any country, the forest area of ​​the country has decreased by 367 sq km as compared to the 2009 assessment. 15 states have registered a gross 500 sq km increase in a forest area with Punjab topping the 100 sq km forest area.

12 states, union territories (especially northeastern states) reported losses of 867 sq km. The main reason for the loss in the forest area of ​​the Northeast is the change in agriculture.

Soil erosion is happening rapidly due to deforestation. Because of this, rivers and mountains are taking revenge in the form of landslides and floods.

Many rivers, which are the lifeline of the country, dry up in the summer while they are flooded during the monsoons. The main reason for the devastation in Himachal and Kashmir in recent years is the unrestrained cut of the forest.

The state governments need to seriously consider this issue with the central government because when there is no tree left in the country, how will the country be free from pollution? How will it grow?

The cutting of trees is reducing the number of wild animals and other animals that maintain the balance of the environment. This has increased the risk of climate change. We have to understand the importance of forests and also make the common people aware, otherwise, we will have no choice but to repent.

Role of the Worldwide Fund in preventing deforestation

The Worldwide Fund (WWF) is one of the world’s largest conservation organizations engaged in the conservation of wildlife and nature. Earlier it was named World Wildlife Fund.

The institution has a major role in preventing deforestation as it aims to preserve genetic organisms and ecological differences. This ensures that renewable natural resources are used to suit the present and future interests of all living beings on Earth. Its goal is to prevent the increasing degradation of our planet’s natural environment by encouraging tree planting.

According to a recent WWF report, 1.3 million people are employed directly by forest-based industries while 41 lakh people are working informally in these industries worldwide.

Massive-scale forests are being removed for industrialization and urbanization which is a matter of grave subject. Statistics show that the number of rainforests in the world has decreased by half since 1990. According to the Worldwide Fund, more than half of the world’s forests have disappeared in the last 50 years.

The WWF is playing a big role in the conservation and propagation of forests, allowing humans to work with nature in the future.

Biodiversity is a natural resource that cannot be replenished. Its extinction lasts forever. If it is not taken seriously then the existence of living beings from the earth is sure to be destroyed in the coming years. To save biodiversity, it is necessary to save forests.

Deforestation is the root of all environmental problems. Deforestation has caused problems such as global warming, flood, drought, etc. Life on earth can exist only if we protect the forests. Due to the continuous cutting of trees, the risk of survival of various animals and birds on the earth is increasing. If deforestation is not stopped, then the day is not far when the lives of all species will be endangered.