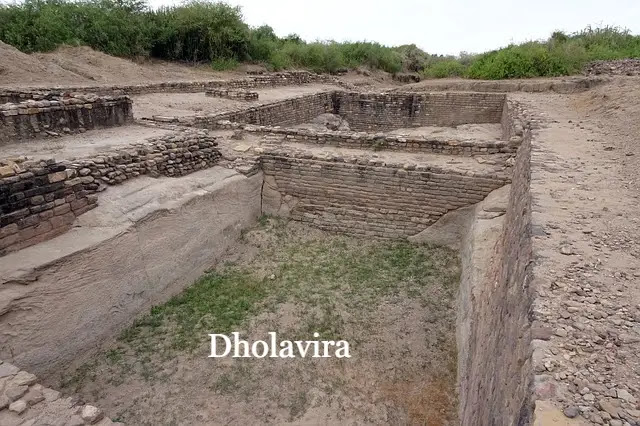 The site named Dholavira is located at the confluence of the rivers Masar and Manhar in the Kutch district in the western end of Gujarat, India. The Rann of Kutch is a barren wilderness area of ​​about 20 thousand square kilometers. In the past, this area must have been under ten meters of seawater for more than three thousand years, but due to the sudden geographical changes, this area has taken the form of today’s drought.

It was discovered by Jagatpati Joshi in 1967-68 but it was extensively excavated by Ravindra Singh  Bisht in 1990-91.

According to archaeologists, the history of Dholavira is five thousand years old. Meaning older than the Great Pyramid of Egypt. The city remained inhabited for about 15 hundred years in the third and second millennium BCE.

Dholavira is counted among the best-preserved cities to date. The study of this city gives us an authentic history of the rise and fall of the Harappan civilization.

The city of Dholavira was divided into three main parts:

Many fraction structures of Dholavira appear to be built in special proportions as if they had knowledge of the Vastu Shastra ratio. A series of grand reservoirs are seen around these cities which were interconnected with each other. The entire city was protected by massive four walls.

The buildings of Dholavira Nagar were made of sun-dried bricks, slab stone, and wood. Measuring their bricks shows that the height of the brick is displayed in a ratio of one, two, four in terms of width and length. The same proportion of bricks has been found in the abundance cities of the Harappan civilization.

The excavation of Dholavira shows us pottery, sculptures, animal figures, ornaments of gold, silver, and oysters, and signs of bull rhinoceros and other animals printed on the seals. Items made of copper and bronze metal and weapons used in work have also been obtained from here.

In Dholavira, a wide plain has been found in the uplift of the fort, which is 47 meters wide and 283 meters long. It may have been used as a community festival game or market.  archaeologists estimate that by the time of 800 BC, the Dholavira had reached its end.

The water management system of Dholavira was amazing. As soon as we step towards the city, then our eyes are on the magnificent water reservoirs. Seeing these, we feel that Dholavira must have been a living conscious city in the past.

But a question also arises in the mind why such a magnificent reservoir would have been constructed, perhaps the residents of Dholavira did not have a special hope of getting water from the groundwater. Even today Kutch is a completely waterless region. It rains here irregularly. There is always a famine-like situation

But in the past, the civilization of Dholavira had been inhabited here for 15 hundred years and with the help of these huge water tanks, they had solved their water supply problem. As if he were a skilled water engineer. He developed a complex water system of huge reservoirs by cutting rocks.

He built 16 grand reservoirs around this city in which about two and a half million cubic meters of water could be stored. Due to the monsoon rains, water would flow into the Manhar river, the water would go to the water reservoirs through the canal and fill the reservoirs of the city one by one.

As water moves from one tank to another, this water is naturally purified, and clean and hygienic water accumulates in the wells inside the fort. The water will then be stored in separate reservoirs for drinking and use.

The people of Dholavira had learned the art of transporting water to all places in the city using natural slopes. The people of the Harappan civilization had developed this amazing technique long before the Romans. Arrangements were also made to draw excess water out of the city at the time of the flood.

The reservoirs of Dholavira were quite large, some of which were about 74 meters long by 29 meters wide and up to 10 meters deep. If we compare them with the famous bathhouse of Mohenjodaro, then it looks three times bigger than that.

Unsolved Mysteries of the Great Pyramid of Giza