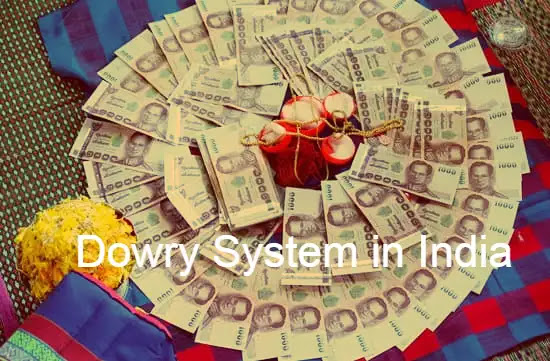 Dowry is affecting Indian society like a disease and there is no visible solution or cure for this. In fact, dowry is a type of violence committed against women. This is a special crime that is committed only against married women.

What is the dowry?

In simple terms, the dowry can be understood as a demand for money or precious items by the groom’s family from the bride’s family in exchange for the girl marrying her son.

Which means the compensation or value demanded by the groom’s family for the groom. In all likelihood, dowry is the exploitation of women only, especially in Indian society. Another dimension of gender inequality that prevails in our country is dowry.

In summary, this practice is based on the assumption that men are the best and, in their laws, the girl must bring a certain amount of money or property for her protection.

The dowry system in India has become an important part of our collective consciousness and has been accepted by all of society. In a way, this custom has become a rule for society, followed by everyone. The situation is that if someone does not take a dowry, then people start questioning him and trying to humiliate him.

Origin of the dowry.

The origin of this social evil can be traced to the custom or tradition of the gifts given to the bride at the wedding. and it was this voluntary system of gifts that recognized our religious beliefs that the girl’s father owes her a duty. In marriage, a part of her property has to be given to her daughter because after the marriage she will have to go to another house and the son will get the remaining property from her father. Therefore, giving a part of his income or wealth to his daughter as a gift was considered a father’s moral duty.

But in ancient times, this system was not a system of exploitation in which a particular demand for the groom had to be made by the bride’s family, it was a voluntary agreement and the bride’s family made gifts according to their capacity.

But with changing times, the gift-giving system became a system of exploiting the (compulsory) demand made by the groom’s family. And this system took the form of a dowry system. As a social evil, it not only insults the sacred bond such as marriage but also violates

The inhuman act of killing and burning the bride for dowry is the result of this dowry practice. Every year thousands of young brides are burnt or killed by their in-laws for not meeting their ever-increasing demand for wealth and property.

Statistics show an alarming increase in cases related to harassment, atrocities, abetment to suicide, and dowry deaths of young brides. In the last 3 years, 24,770 women have died due to dowry. Which shows the level of violence being perpetrated by young brides.

These murders were, in fact, emotionless murders (brutal) where an innocent girl is killed simply because she cannot bring money or property according to the demands of her husband and her relatives.

The most disturbing and unfortunate fact in such cases is that it is the woman who plays the main role in these aforementioned crimes and the men in the family play either passive supporters or active partners. And especially husbands do not have any special respect for the marital obligations of protecting and protecting his wife.

The Dowry Prohibition Act 1986 makes dowry transactions a punishable offense. But despite the act, the dowry practice continues unabated and is actually increasing day by day.

The humiliation and hardship the bride’s family has to face are very extraordinary. As a result, many social evils such as female feticide and abortion after selective sex testing are encouraged.

That is why the girl is always discriminated against in the homes because she is considered a burden on the family and dowry has to be arranged in their marriage, so the family members do not think it is right to spend money on her education and food.

The Dowry Prohibition Act 1986 has failed to curb the evils of the dowry system and it has also lagged behind providing solutions to the growing crises of dowry killing. Therefore, the Parliament considered that special provisions should be made to deal with the cases of the crime described in the burning of the bride.

Therefore, through an amendment, a new section, Section 304-B ​​was incorporated in the Indian Penal Code which creates a new crime “dowry-murder”. This provision explains in detail the elements that oversee the affairs of the death of a married woman and from the facts found there, that death is considered a dowry death. According to the provision, the maximum punishment of life imprisonment is given to the husband and any relative of the husband for dowry death.

Although this provision is also there and cases related to it are also being reported continuously, but the rate of dowry murder crimes is not coming down. Apart from murder, various forms of exploitation, torture, and cruelty are displayed on helpless married women.

Very few of these crimes are reported due to social pressure and fear of marriage breakdown. Additionally, police officers do not present dowry-related FIRs for various apparent reasons, such as bribery or coercion by the groom.

But aside from all this, women’s lack of economic self-sufficiency and low educational level is the real reason why women cannot register complaints of dowry atrocities or exploitation that occur on their own. And those married women are forced to endure persecution and dowry pain with a ray of hope.

Role of the new generation in the eradication of the dowry system.

The dowry system in India is the real problem that prevails throughout society, which is supported and encouraged directly and indirectly by society and in the future, there is no hope of improving this problem. Materialism is the main driving force of people and seeks a modern lifestyle and comfort; People are willing to go to the extreme of killing his wife or daughter-in-law.

Now the ray of hope is only seen in the new generation of boys and girls, who are educated and have modern thinking. They should stand up and fight this social evil, and if such an incident occurs in their own family, they should also oppose it.

In addition, young brides should also oppose her, if their in-laws demand some kind of dowry, and only then should the police or the corresponding authorities file a complaint; They must avoid becoming victims and empower themselves because the law is already available to protect and empower them.

Otherwise, the legal provisions will remain bookish and will have no effect on reality.