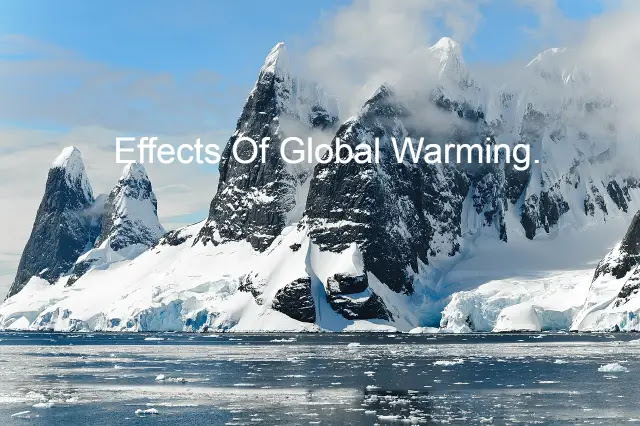 According to the US Geological Survey, Montana Glacier National Park used to have 150 glaciers but due to global warming, only 25 are left.

Climate change has changed a lot due to global warming like increase in the summer season, decrease in cold weather, increase in temperature, change in the circulation of air, change in weather patterns, melting of snow peaks, ozone layer Fall, severe storm, cyclone, flood, drought, etc.

New Jersey scientist Wallace Broecker first defined global warming as an increase in the Earth’s average temperature due to greenhouse gases (carbon monoxide, carbon dioxide, and methane). These gases are emitted by vehicles, factories, and many other sources. These dangerous gases are absorbed into the Earth’s atmosphere instead of dissipating heat, which increases the temperature.

It is negatively impacting the environment. A detailed description of some points related to the effects of global warming is as follows: –

1.The impact of global warming on water

Glaciers are melting due to increased global warming, resulting in ocean water warming day by day. Due to these two, the water level in the sea has risen. This is expected to further raise sea levels with rising temperatures in the coming time.

This is cause for concern because it will create a flood situation in coastal and low-lying areas, which will pose a significant problem for human life. Apart from this, the ocean water has also turned acidic due to the aquatic life being in danger.

2. Impact of global warming on Earth

3. Effects of global warming on Ocean

The global sea level has risen steadily since the 20th century. There are two reasons behind the rise in sea level, the first is the warming of the ocean water that is causing the thermal expansion of the water and the second reason is the constant melting of the ice on the glacier. Sea level is predicted to rise further in the coming time. The continuous rise in sea level represents a great threat to life in coastal and low-lying areas.

4.The impact of global warming on the Environment

Global warming has a direct impact on the glacier. Glaciers are melting as temperatures rise. Flood-like conditions are occurring in many parts of the world. Not only this, the rising sea level has endangered the species of living beings and the balance of our ecosystem is getting worse.

The result of the rise in temperature has started to manifest as the changing season. The process of evaporation begins to accelerate due to global warming, increasing the risk of uncontrolled rain. A flood-like situation arises in many areas. Many animals and plants are unable to tolerate excessive rainfall, which results in the trees being depleted and the animals fleeing their places. This is having an impact on the balance of the ecosystem.

On one hand, a flood situation is being created while many countries are facing drought problems due to global warming as the amount of rain is not only increasing due to evaporation but it is also increasing the problem of drought. With this, drinking water is increasing in many parts of the world. Due to drought, people are not getting enough food and many countries have become starving.

As the temperature rises it adversely affects our health. Outbreaks of waterborne diseases such as malaria and dengue are increasing due to excessive rainfall. Carbon monoxide levels in the atmosphere are increasing, causing people to have problems breathing. If the temperature continues to rise in this way, respiratory diseases and their symptoms will spread rapidly.

According to the data, the World Health Organization’s health report estimates that 2.4 percent of middle-income people will suffer from diarrhea and 6 percent worldwide due to malaria.

It is emerging as a new factor of global warming on which experts are researching. It is believed that people lose their homes and families in droughts, floods, hurricanes, and natural calamities. This affects their mental health. After traumatic stress and disorder, they develop severe depression symptoms and other mental illnesses. Many farmers take suicidal steps when the drought situation becomes severe.

10. Effect of global warming on agriculture

In the coming years, the biggest impact of global warming will be on agriculture. However, we have had to face its consequences in the case of crop wastage many times. Due to high temperatures, many plants become difficult to thrive, due to which their existence gradually ends. Due to unpredictable rains or extreme droughts, many crops do not have good yields, so grain prices are rising rapidly. Trees and plants are our main source of food. Thus there will be a shortage of food around the world and it is highly anticipated that it is going to cause a war between many countries.

Due to imbalance in the sea, the arrival time of many seasons is not known. In many places, the rainy seasons are so long that crops are ruined and in some areas, the long summer affects our lives.

Many species of animals are endangered due to ecological imbalance. Many species have disappeared and are on the verge of extinction. One day after the end of animals, the existence of the whole world will be in danger.

13. Increase in fire incidence in forests

Increasing heat has increased the incidence of fire in forests. This incident is threatening the lives of animals living in the jungle as well as the people living near it.

With the completion of work, the production of goods and construction goods are also affected. Due to the persistent influence of nature, it seriously affects the food industry. Meeting the needs of people is now becoming a big issue. If the sea level rises and the problem of floods increases then it will have an impact on our entire power system. The entire grid can break due to hurricanes and strong rains and it can ruin our entire lifestyle. Since many operations are run by electricity only.

15.The threat to many countries

Many countries are likely to be submerged due to rising sea levels. The way the sea level of a country like Greenland is rapidly decreasing, due to these beautiful cities, countries and even continents will become a history in the sea in the coming times.

16. State of violence and war

There are many reasons for mutual violence in humans, but in the coming time, the main reason for violence will be the rise in the temperature of the earth. Lack of food and water will create resentment among the people and they will not back down from using violence to achieve this. This situation can take the form of a war on a global scale.

Ozone gas is found in thickness. Ozone (O3) is considered a very active gas. If the ultraviolet rays of sunlight come from Earth to space, the stratosphere of the Earth’s atmosphere breaks down the oxygen molecules present in the atoms. Oxygen molecules combine with single atoms (O2 + O = O3) to form combined ozone. Ozone is decomposed by reacting with nitrous oxide.

Thus the dynamic process of destruction and the natural process of construction remain. This equilibrium is interrupted when CFCs and other compounds of chlorinated carbon tetrachloride begin to appear in the atmosphere. They now work with chlorine atoms to form chlorine mono-oxide (CLO) with ozone and break down ozone into oxygen. This is called ozone erosion. Chlorine again acts as a catalyst and the reaction remains active.

The ozone hole was first discovered by American scientists in 1973 in Antarctica. In 1985 Joseph Foreman saw a 50 percent drop in the ozone layer. Declining ozone is a matter of concern for humans as it can lead to many diseases in humans, the main ones being – skin cancer, adverse effects on plants, and chlorophyll.

Negative effects of global warming at a glance

Stopping the process of global warming is not enough for just one person, but with a little effort, we can definitely reduce its speed. Whether we are at home or in the office, we should keep our activities in mind in relation to protecting the environment. We should reduce pollution and protect energy sources. We should use ozone-friendly substances-Hidroclorofluorocarburos(HCFCs) instead of ozone-depleting substances such as CFCs.