In the capital of India, Delhi has a mystery that no one in the whole world has solved, that has surprised and disturbed the whole world, After all, what is that secret? Will know in this article today

There is an iron pillar near the Qutub Minar in Mehrauli, Delhi, which is living proof of the high-tech science of ancient India. The iron pillar of Delhi has been in the open air for more than 1600 years.

This massive iron pillar in Delhi is 23 feet 8 inches tall and is 3 feet 8 inches buried in the ground, the thickness of the bottom being 17 inches while the top becomes thin where its thickness is 12 inches.

Seeing this iron pillar made of about 98% pure steel, it is known that how skilled are the experts in metallurgy to make it.

But this pillar made of ferrous metal is another reason to be famous. This iron pillar has been facing rain, wind, and sunshine for many centuries But to date it has not rusted.

History of the Iron pillar of Delhi

But experts believe that it was built long ago. It was previously a part of Hindu and Jain temples. This iron pillar of Delhi says something in Sanskrit that it was erected as a flag pillar in front of the world temple built by King Chandra in Mathura. And then Garuda settled in it, hence its name Garuda Pillar

But it is said that after digging a bit, a stream of blood started flowing from it, the astrologer said that this iron pillar rests on the funnel of Sheshnag, so it is unwavering it will remain as long as your rule.

Anangpal dug the pits, even after which he kept moving, which people started calling him a deli and later on he became familiar with the name of Delhi.

There are two articles written on this column, one Prithviraj Chauhan, who ruled till the end of the 12th century, and the other inscription is written in the Brahmi script of the Gupta period of the fourth century. Which states that it was built in memory of which king 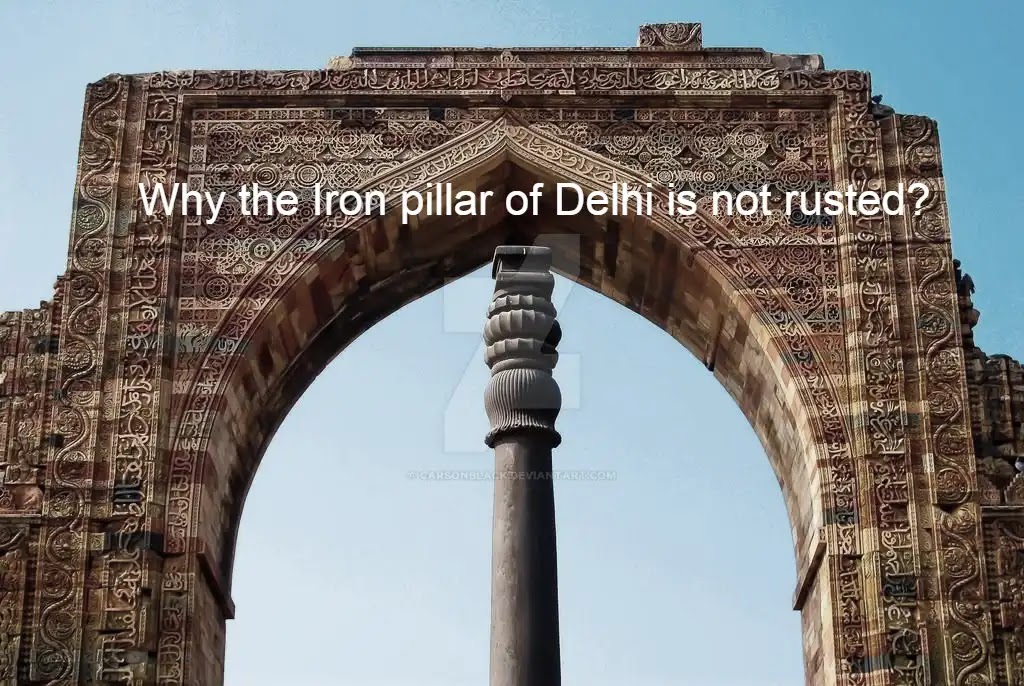 Why the Iron pillar of Delhi is not rusted?

Many metal scientists have investigated this and given their reasons behind its corrosion, of which IIT Kanpur expert Balasubramanian and his team are leading.

This analysis revealed that phosphorous was added to the cast iron when Pillar made iron. Because of this, the iron molecules were unable to form bonds, Due to which the speed of rust was reduced by thousands of times.

Today a similar process is used to protect radioactive material in the naval reactors.

A chemical test conducted in 1961 showed that it was made of pure steel with very little carbon content, according to the Indian chemist, Dr. B.B. Lal, in 20 to 30 kg pieces of hot iron. Has been made by adding to it, but surprisingly it does not see a single joint in it. He inspected this column and researched it and then gave his vote.

They discovered that to protect this iron pillar of Delhi from corrosion, it contained a high amount of phosphorus, while the amount of sulfur and manganese was kept low. This increases the resistance to corrosion, as well as a thin layer of oxide on it which helps to protect it from rust. This iron pillar stands as a question mark to the whole world today.

Stambheshwar Mahadev Temple in Gujarat: The Secret Behind the ‘Disappearing Temple’

The story of the Iron pillar

When a foreign researcher, Erich von Daniken, came to Delhi to study all the amazing things in the world, people directed him to see the Qutub Minar. But upon seeing Qutub Minar, he was shocked but not satisfied as he was searching for some mysterious and surprising things.

Just then, his gaze fell on the iron pillar near the tower, and Erich von Daniken was surprised to see that it suddenly came out of his mouth, a gift from ancient India, not from the people here, but from other planets. Given by beings. He wrote in his book Chariot of the Gods. That, to date, nothing has been made so pure steel anywhere in the world, the iron used in it matches the pieces of steel found in the Alpheus Mountains and the Andes Mountains.

It has been confirmed that it has been left by astronauts millions of years ago, the first study of the metal of this amazing 12-ton iron pillar of Delhi was done by Robot Hadfield, after analyzing this metal, he told that feudal steel A temperature of 1300 to 1400 ° C is required to mold to a certain size.

But the steel that is installed in this column is called ‘RAD’ Iron which requires a temperature of more than 2000 degrees for melting. Surprisingly, there was no high heat furnace in that period, so how did it mold?

Many scholars have different opinions about this iron pillar. It is a natural pillar and has been present at this place from the beginning. Some scholars say that this pillar has been left by Alien who came to earth since ancient times. Daniken presented evidence in this topic in his book

When Nadir Shah learned that this column belongs to a Hindu king, he was ordered to break it immediately. This pillar was only scratched when it was shot, but a part of the nearby mosque was damaged, after which Nadir Shah changed his intention to blow up the pillar.

it’s said, on touching the back of this pillar with both hands, the wishes are fulfilled? However, you cannot do this now because the pillar was damaged by a tourist in 1997. Because of which an iron flood was put around it.