There are hundreds of ancient magnificent temples in India which are unmatched structures and beautifully, Surprise today’s modern engineering and science and Among them are Konark Sun temples, which is one of the most mysterious temples.

There are many such mysteries related to the Konark temple, whose answers are being discovered even today. It is said that once upon a time there was a special type of giant magnet on the top of this temple, due to which the idol of Sun God kept hanging in the air all the time. In such a situation, the question arises that how the Konark temple would have been built hundreds of years ago and what is the reason that for the last 118 years the main gate of Konark sun temple is closed. Today we will know many more mysterious things about this temple.

Konark Temple is located inside a town named Konark, at a distance of (23 mi)35 km from Puri city in the state of Orissa, India. It is said that the Konark temple was built by King Narasimha Dev I of the Eastern Ganga dynasty around 1250 B.C. This temple was built by King Narasimha Dev by dedicating it to Lord Suryadev, in which a huge and grand idol of the Sun God was installed. Even the structure of this temple has been done like a chariot of Sun God.

In fact, in Hinduism, the Sun God is said to be the source of the life of the entire universe and it is believed that the Sun God travels in the sky on a chariot pulled by 7 very powerful horses. Inspired by this imaginary chariot, the design of this temple has been prepared, due to which it looks like the chariot of Sun God.

12 pairs of stone wheels have been installed on both sides of this temple, as well as 7 horses have been made on the front side of this temple in such a way that seeing them, it seems as if they are dragging the temple forward.

These wheels made on both sides of the temple are beautiful as well as a fine example of ancient Indian engineering. Actually, these 12 wheels represent the 12 months of the year and with the help of these wheels, the exact time can be estimated.

In fact, these wheels act as a sundial that tells time not only of hours but up to minutes and seconds. Now it is obvious that there were no clocks at that time, so people used to find out the time only by looking at these wheels.

Apart from this, the architecture of the Konark sun temple is also in such a way that the first ray of morning falls directly on the entrance of the temple, which is really a wonderful sight to see. Excellent work of carving and sculpture is also seen on the walls of Sun Temple at Konark and each idol made here has its own different meaning. 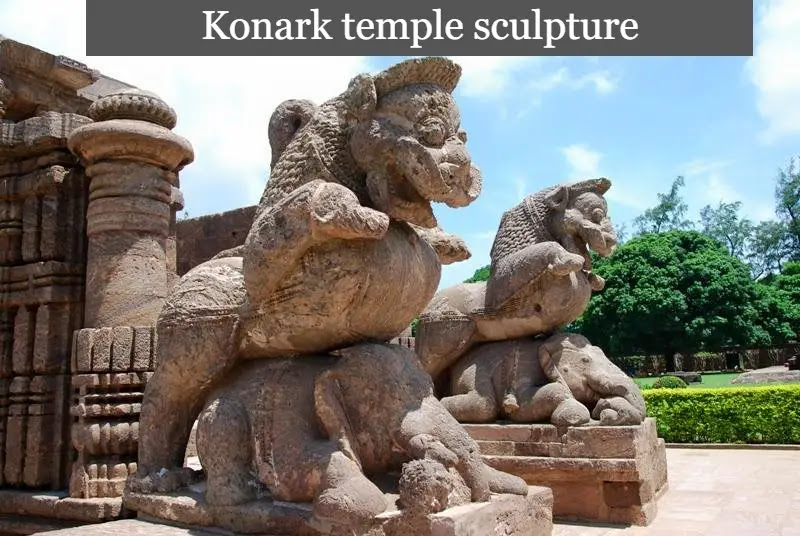 For example, look at this sculpture, in which the lion is seen above, the elephant below it, and the human being buried under them. Experts say that in this sculpture, the lion represents the ego of the human being and the elephant represents the emotion of the human being, thus the meaning of this idol comes out that a person is trapped in the emotions created due to his false ego and remains trapped throughout his life. That is, only by overcoming his ego, a person can become a human in the true sense.

Friends, there are many such things that make this temple so special and mysterious, but the most famous and huge magnet among them is that once used to be on the top of this temple. Although this thing has not been proved historically to date, still many experts believe that a 52-ton weight stone called “Lodestone” was installed inside this temple which was known as a natural magnet.

Because of this “Lodestone” huge magnet, the idol of Lord Surya installed inside the temple was always hanging in the air, and hanging in the air like this was no less than a wonder in itself. Now different people tell different stories about what happened to this magnet and where is it in today’s time.

In which the most famous theory is that initially this temple used to be on the seaside, but with time gradually the seawater decreased and this temple was several kilometers away from the coast. It is said that the Konark temple magnet was so strong that due to this the compasses of ships passing in the sea stopped working and those ships would go astray while passing through here.

It is said that the Portuguese sailors took away this magnet and the idol of Lord Sun God from the temple with them to save their ships, and The exit of the magnet from this temple was the real reason for its fall.

In fact, some experts believe that the magnet had a big role in strengthening the structure of the Konark temple and keeping it standing because the stone used to build this temple was placed between the blocks of iron. So that all the stones remain fixed in their place due to magnetic power. In such a situation, when that magnet was removed from the upper part of this temple, then the entire structure of the temple became very weak, which gradually got destroyed over time.

Apart from this, some people also claim that this temple was destroyed not by Portuguese sailors but by foreign invaders who entered India, and also one of the idols installed in this temple is still located in the Puri Temple of Orissa. And a statue is kept in the National Museum of Delhi.

However, none of this is historically proven. Friends, there is no doubt that the Konark temple looks very amazing and beautiful, but the part of the temple that we see today is not actually a complete temple.

In fact, there used to be a total of 3 pavilions in this temple, in which 2 pavilions were completely destroyed many centuries ago and today only one pavilion remains. Now people give different reasons behind the destruction of the rest of this temple.

Now it is difficult to say which Thing one is correct and which is wrong. Experts are still ascertaining the real reason behind the destruction of this temple.

It is said that as high as we see this temple today, in fact, it used to be much higher than that. Even the sailors traveling in the sea used to see the summit of this temple from their ships.

Apart from this, there is also a theory that Konark used to be a famous and prosperous city in ancient times but during the 16th century when the idol of Sun God was removed from this temple then worship in this temple completely stopped. Due to which the pilgrims also stopped coming to this temple and on seeing this city was completely deserted and turned into a forest.

Then after many centuries when this temple was discovered, its condition had become very bad and many parts of it had completely collapsed and destroyed.

Talking about today’s time, there is only one pavilion left of Konark temple, which is considered as the main pavilion of this temple, but the surprising thing is that all the ways to go inside this pavilion were completely sealed 118 years ago. Which are still closed today.

Now in such a situation, the question arises that why the door of this temple has not been opened to date after so much time has passed. Friends, this thing makes this temple even more mysterious and People also say all kinds of superstitious things about the closure of this door.

However, the reasoning behind its closure is that by the end of the 19th century, the last pavilion of this temple had also weakened and reached the verge of collapse, and to save it from collapse, the then Governor John Woodburn in the year 1901. Inside this temple, all its doors were sealed by filling sand.

After this, not knowing how many times it was talked about opening the main door of this temple, but every time due to different reasons the opening of this door was postponed, even today 118 years have passed but Even now this door is lying closed in the same way.

In such a situation, the question comes to the minds of people whether this door was really closed to save the temple from falling or there is some other big secret hidden behind its closure. Well, we will get the answer to these questions only when the mysterious door of Konark temple opens. So friends if you liked the article then do not forget to share it. Thank you very much for giving your valuable time.