A very unique method was adopted in the construction of the Kailash temple. This temple has been made by cutting the sheet of a mountain from top to bottom. 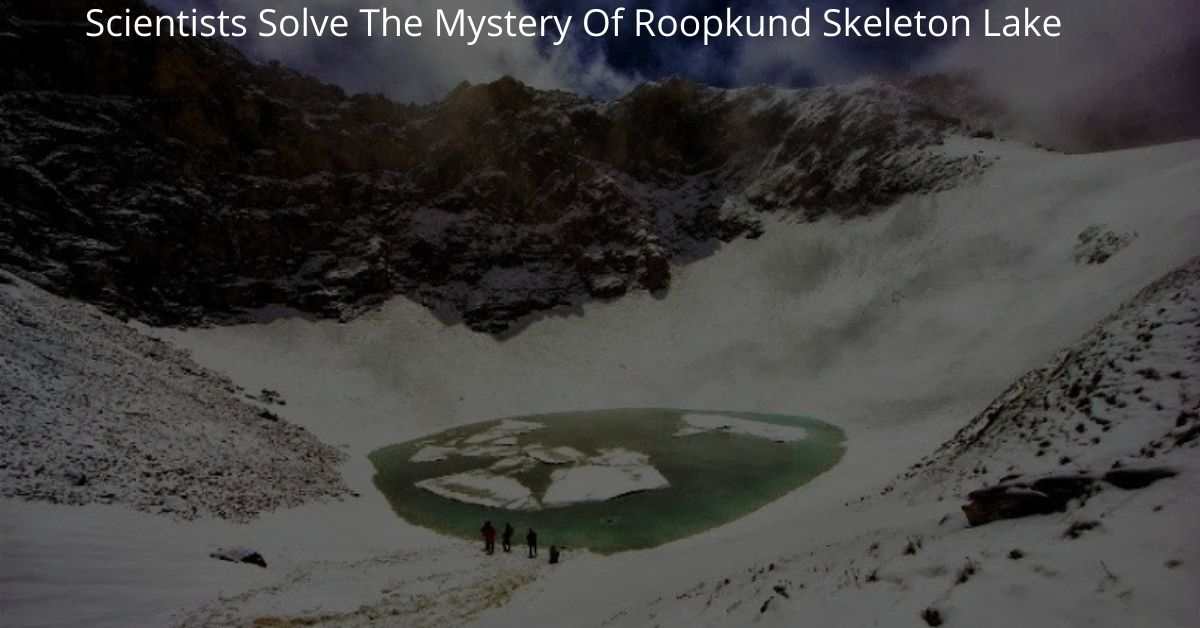 Roopkund skeleton lake situated at an altitude of about 5,029 meters (16,500ft) on the Himalayas in Uttarakhand, The male skeleton is present here and due to these skeletons, this lake is very famous and is also called Skeleton Lake.

We are going to tell about those unsolved mysteries of Himalayas. Scientists are also constantly trying to know the real reasons for which. 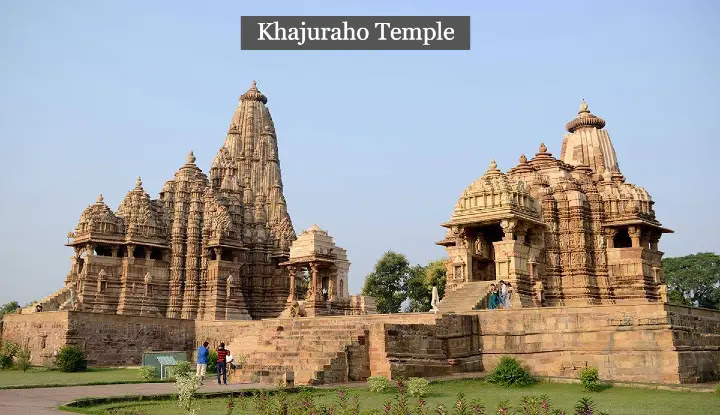 There is a city named Khajuraho in the Chhatarpur district of Madhya Pradesh, which has a very old history. It is said that this city was named Khajuraho because at one time there used to be a huge garden of palm trees here.

Apart from this, some people also believe that in ancient times there used to be two big palm trees at the gate of this city, due to which it was named Khajuraho. Whatever may be the exact reason, but it is clear that the name of this city is related to the date palm tree.

Khajuraho has some ancient temples of Hinduism and Jainism which are considered one of the most beautiful and famous historical heritages in India. All these temples are collectively named the Khajuraho Group of Monuments.

The importance of these temples of Khajuraho can be gauged from the fact that in 1986, This group of temples was included in the list of World Heritage Sites by UNESCO.

This is the reason that today the full credit for building these temples is given to king Chandravarman only. For your information, let us tell you that king Chandravarman is considered to be the greatest king of the Chandela dynasty because this dynasty was established by him in the 8th century.

Friends, at that time his kingdom was named Bundelkhand. According to today’s time, this Chandela kingdom of king Chandravarman is spread between Yamuna and Narmada rivers from Bundelkhand to Uttar Pradesh.

All the rulers of the Chandela dynasty had a great love for art. This is the reason that during his reign he had built these beautiful temples. It took about 165 years to build all these temples.

During this time the rulers of the Chandela dynasty kept changing but the work of construction of temples continued in this way. Historians say that initially, the number of these temples was 85, which were spread over an area of ​​about 20 km, but now only 25 of these temples have survived, which are spread over a radius of 6 km.

Apart from this, many other rulers like “Qutubuddin Aibak” of the Slave dynasty and “Sikandar Lodi” of the Lodi dynasty tried to destroy these temples many times and in this way, only 20 to 25 temples are left in Khajuraho today. 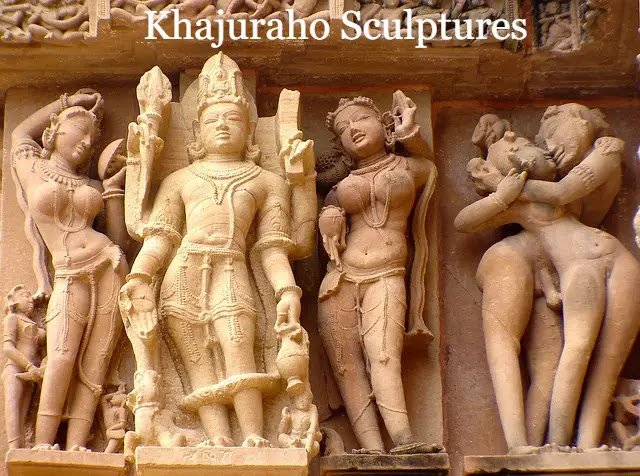 Now if we talk about society, then temple vulgar sculptures find them very strange and obscene. Many people strongly oppose the existence of these idols. Well, it is natural for this to happen because sex between us humans has always been considered a secret activity.

In such a situation, it is not common to have such idols openly in a holy place like a temple.

No one has an exact answer as to what was the secret of making such sculptures on Khajuraho temples. but by some different scholars of the world, different reasons are given behind the making of these idols. So let us know about some famous reasons for making these idols.

One day in the evening, Hemvati was taking a bath in a pond when the sight of the moon i.e. Chandradev fell on Hemvati. Seeing the beauty of Hemvati drenched in the water of the pond, Chandradev gave his heart to her at that very moment. He could not stop himself even after wanting to change his form and immediately reached Hemvati.

Chandra Dev kidnapped her to get Hemvati and took her with him to the forest. After going to the forest, Hemvati also fell in love with him, and from this union, Hemvati gave birth to a son whom she named Chandra Varman.

Fearing society, Hemvati raised her son in the forest. She wanted to make her son a great ruler from the very beginning. Chandravarman grew up and laid the foundation of the Chandela dynasty and fulfilling his mother’s dream, he became a great king and a heroic ruler.

One night Chandravarman’s mother Hemvati came into his dream and asked Chandravarman to build such a temple which would send the message to the society that like other important things in a person’s life, his sexual desire is also an important part of life and his Fulfilling sexual desires is not a sin of any kind.

After seeing this dream, Chandravarman was determined that he would fulfill this wish of his mother in any case, and after much deliberation, he chose Khajuraho city for the construction of these temples. For this, he first made Khajuraho the capital of his empire, and then in this capital, he made a huge sacrifice of 85 altars.

Later these 85 grand temples were built in place of these altars, which are still famous for their beauty and artifacts in the world, and According to this legend, in this way, these temples came into existence inside the world and that is why such idols have been made on them.

Secondary Reason-: Many explorers say that these idols were made so that the people who come here, after eliminating all kinds of indulgences from their minds, go inside the temple with a clean mind.

In fact, these scholars said that man cannot get rid of his luxuries until he himself experiences them and these idols were made on the outer walls of the temple only to make people feel their luxury.

These idols have been made in such a way that every person going to the temple definitely has their eyes on them and thus because of these idols people enter these temples with a clean mind.

Third Reason-: An argument is also given behind making such idols that in the era when these temples were built, Buddhism was spreading very fast and under the influence of Buddhism, most of the youth of that time left their homes and became celibate.

It is said that such idols were made all over the country including Khajuraho only to entice those youths again towards household life. Actually, the people of Hindu and Jain religions wanted to explain to the youth that salvation can be achieved even by adopting a householder’s life, that is why such temples were built at different places.

Fourth Reason-: One of the reasons for making these idols on these temples is also told that during the Chandela dynasty there used to be a community of Tantriks in this kingdom and the people of this community at that time considered both yoga and enjoyment as means of attaining salvation.

They wanted to convey this thing to society and that is why they had built such idols on these temples. You will be surprised to know that India’s famous spiritual guru “Rajneesh Osho” has described these idols as the best heritage of the spiritual world.

In fact, Osho in his discourse “From sex to mausoleum”. He had openly expressed his views on these temples of Khajuraho. He has said that even after seeing the statues of naked sex in Khajuraho, you will not feel that there is anything dirty in them.

You will not think that the thinking of the creator was dirty, here, seeing these sex idols, one experiences peace and purity, which is very surprising. Osho had said that those who cannot control their desires should go to see these temples.

Because they believed that if a person pays attention to these idols made on the walls of temples for an hour, then his lust can end forever. He considered these idols to be the best objects of meditation.

Similarly, different people have different opinions and thinking behind making these temples and idols of Khajuraho. By the way, whatever may have been the right reason for making them, but seeing them, one thing can be said that the artisans who made them must have been really amazing talent, “Kakanmath Temple” is a temple that even scientists are afraid to touch. Yes, you have heard exactly right. This temple … Read more The site named Dholavira is located at the confluence of the rivers Masar and Manhar in the Kutch district in the western end of Gujarat, India. Hello friends and welcome to our “Worldwidewebtimes” blog. Today we will learn about the mystery and history of the Adi … Read more This forest has hidden so many secrets inside it that even scientists are beating their heads to learn them. So let’s know the 8 secrets of the Amazon Rainforest.