This famous Nageshwar Jyotirlinga of Lord Shiva located in Dwarka, Gujarat is located at a distance of about 16.5 km from Dwarka. It is one of the 12 Jyotirlingas of Shiva and according to Hindu religion, Nageshwar means God of serpents, The great glory of the vision of this holy Jyotirlinga has been told in the scriptures.

It is believed that the person who listens to the story of its origin and importance with reverence will get rid of all sins and attain the supreme holy divine abode of Lord Shiva. 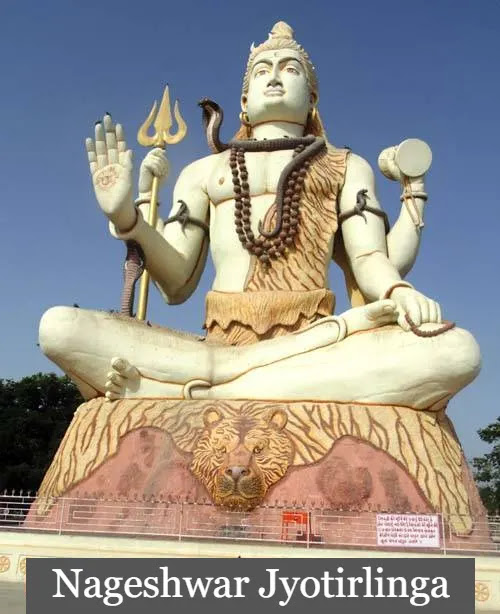 Shri Nageshwar Jyotirlinga Temple or Nagnath Temple is located on the coast of Saurashtra in the Indian state of Gujarat on the route between Gomti Dwarka and Bet Dwarka Island. Nageshwar temple is about 16.5 km(10 miles) from Dwarka Dham, which is one of the twelve Jyotirlingas of Lord Shiva.

Lord Shiva is worshiped as Nageshwar in Nageshwar Jyotirling. Nageshwar is known as “Darukwan”, which is the name of an ancient epic in India. The actual location of the mythical Darukavana forest is debated. No other important clues indicate the location of the Jyotirlinga. ‘Darukavan’ remains the only clue.

There are also two other temples called Nageshwar in India, one near Purna in Andhra Pradesh and the other near Almora in Uttar Pradesh, and Nageshwar has also been installed in these temples.

According to the legend related to Nageshwar Jyotirlinga, a great godly and virtuous Vaishya named Supriya was an exclusive devotee of Lord Shankar, he was constantly engrossed in his worship and meditation. Used to offer Lord Shiva in all his work, was engrossed in devotion to Shiva through his mind, word and deed.

The demon named Daruka was very angry with this Shiva devotion, he did not like this worship of Lord Shiva in any way and he constantly tried to obstruct the worship of Supriya in any way. Once Supriya was going somewhere on a boat with her other companions. The evil demon Daruka, seeing this opportunity, attacked Supriya’s boat, captured all the passengers in the boat and took them to his capital, and imprisoned them.

Shiva devotee Supriya started worshiping Lord Shiva every day in the prison and also inspired other prisoners with devotion. When Daruka heard this news about Supriya from his servants, he got very angry and reached that prison. At that time Supriya was sitting at the feet of Lord Shiva with both eyes closed.

Daruka, seeing this posture of his, scolded him in a fierce voice and said, “Oh evil Vaishya, closing his eyes and thinking about what nuisance and conspiracy to do here at this time; After which the demon Daruka got burnt with anger, he immediately ordered his retainer to kill Supriya and all the other prisoners.

But Supriya was not at all disturbed and frightened by this order, she was praying to God with a concentrated mind for the liberation of herself and other prisoners. He had full faith that my beloved Lord Shiva would definitely deliver me and my companions from this calamity.

Hearing Supriya’s prayer, Lord Bholenath appeared in the form of a Jyotirlinga sitting on a shining throne in a high place in the prison. He thus appeared to Supriya and gave her his Pashupatastra. After killing the demon Daruka and his assistant with this weapon, he went to Shivdham and according to the orders of Lord Shiva, this Jyotirlinga was named Nageshwar.

In the premises of Nageshwar Jyotirlinga, there is a large, attractive, and huge statue of Lord Shiva in meditation posture, due to which this temple is visible from a distance of 3 k.m. This idol is 125 feet high and 25 feet wide.

The main entrance of the temple is simple but very beautiful. Before the temple, there is an auditorium where small shops of worship materials are installed and Nageshwar Shivling is established in the form of round and black Trimukhi Rudraksha, a silver cover is mounted on the Shivling and A silver nose shape remains. Behind the Shivalinga there is a beautiful idol of Mother Parvati. Men are required to wear a dhoti to enter the sanctum sanctorum.

How to reach Nageshwar Jyotirling

By road:– Regular buses are run from Jamnagar and Rajkot in Gujarat for Nageshwar Dham. The easiest way to reach Nageshwar Temple is by car or rickshaw from Dwarka. Government Dwarka Darshan buses also provide the Nageshwar Jyotirlinga darshan here.

By air:– Jamnagar is the nearest airport at a distance of 145 km from Nageshwar temple, from here you can take other means of public transport.