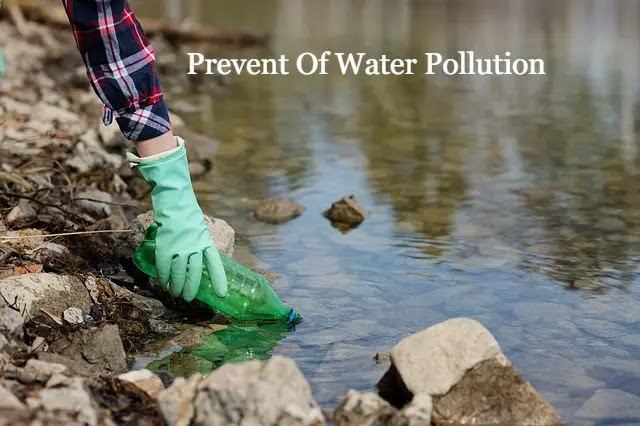 Development of modern human civilization, a serious problem of water pollution has arisen. The trend of industrialization and urbanization is increasing. With the establishment of various industries in and around villages, they are rapidly turning into towns and cities.

To avoid water pollution, polluted water, residual masonic waste, etc., from extreme construction of industries, it should be prevented from flowing into rivers through drains. It can prevent water pollution to some extent.

Ways to prevent of water pollution

The contaminated water, residual chemical wastes, etc., released from excessive construction of industries are dumped into the rivers through drains. The wastes generated by the daily activities of the people living in the houses are also being flowed into the rivers, causing the rivers to become highly polluted.

1. Industries and industrial institutions will have to act more responsibly

Many industries throw their wastes away without being treated, which flow into the rivers flowing through the rainwater. Proper disposal of these wastes is essential for water pollution not spread by industrial wastes.

Some industries follow all waste disposal rules and completely destroy industrial waste or use it safely.

Along with these rules, it is also necessary for the industries to change their working practices and follow all the related norms to prevent water pollution caused by manufacturing work.

Not all industries are following these rules and most of them are dumping waste directly into rivers, which is a dangerous scenario related to water pollution. All these wastes eventually affect humans and animals.

It is also extremely important to adopt the right methods of disposal of toxic wastes. Safe disposal of wastes and water from the factories where paints, sanitation, and stain erasing chemicals are used is very important.

Oil leaks from vehicles or other machines also have to be completely prevented. The leakage of oil from cars or machines is also one of the major factors of water pollution.

Because of this, care of cars and machines is very important. After completion of the work, especially in factories where oil is used, it is necessary to clean the bad oil or safely dispose of it.

Drains need to be cleaned regularly to prevent water pollution. Construction of Paved drains is essential in rural areas as water flows freely in rural areas.

In rural areas, according to tonnage, waste, and pollutants flow with water and drain into rivers and canals. We should develop a technique to keep drains away from water sources.

4. Recycling and reuse of water

Some other ways to prevent water pollution include recycling and reusing of water and this helps to ensure the availability of clean and fresh water.

We can use low-quality water such as dirty water in industries, after washing utensils or gardening, etc. and thus we protect the clean water from getting contaminated by these works. We can also use treated water for washing vehicles.

We should use clean and fresh water only for drinking. Presently, water is being recycled in limited quantities. Therefore, we have to put more emphasis on proper recycling and reuse of water to prevent water pollution.

We need to plant more trees to prevent soil erosion. We have to adopt such methods by which soil erosion can be prevented and the health of the environment can be improved.

6. It is necessary to live in harmony with nature

Human beings have forgotten that their existence on this earth is due to nature and the environment. Human negligence is a major cause of environmental pollution. Species of various aquatic organisms die only due to humans bathing in the water and polluting it.

Household waste and industrial waste add to this problem even further. The time has come for us to live in ways that maintain the continuity of life.

Farmers will have to stop the use of various chemical fertilizers and pesticide spraying on crops to produce tremendous crops in their fields.

All these chemical substances go into the ponds and rivers through rainwater and pollute the water bodies badly. Farmers need to adopt organic farming methods.

To implement the “Swachh Bharat Abhiyan” in its entirety, it is necessary to make India completely open defecation-free. At present, the problem of throwing garbage in public places and defecation in the open continues to worsen. When it rains, all this waste and excreta go into the rivers or ponds and thus pollute the sources of water. People themselves, in the absence of a proper drainage system, discharge the waste materials into rivers and ponds.

Ponds and rivers are also used extensively for the purpose of bathing and washing clothes, due to which large amounts of dirt and pollution accumulate in the sources of water. Due to such other activities, garbage, sewage, dead bodies, old clothes, and other dirty materials and ashes, etc. flow into the rivers. There is no proper arrangement of toilets in slums and settlements located around residential areas in the city and this situation shows us the need to strive sincerely to achieve the goals of Swachh Bharat.

9. Cleaning of waterways and seaside

Cleaning rivers and ponds at regular intervals are necessary because humans have badly polluted them. Even groundwater has been polluted and humans are spreading pollution in seawater as well. Traveling by sea routes and living near the beach has become a competition and due to this many small and big settlements have settled near the beaches and these settlements are contributing to polluting the seawater which is a serious concern. subject to.

Toilets do not normally exist in temporary settlements near the sea and these people defecate directly on the beaches and also throw household waste into the sea. Sea ships also throw their garbage in seawater. Sometimes there are shipwreck accidents in the sea due to which various chemical substances and oil flow into the seawater which leaves long-term effects on the sea creatures.

Due to this kind of pollution in the seawater, some animals die instantly and the seawater gets more polluted by them. Along with the organisms living in the seawater, this water also makes humans sick. Developed countries also dump their e-waste and other toxic waste into the sea, which causes seawater to be polluted severely.

10. We must strictly follow all laws to prevent of water pollution

However, the effect of this law has been limited. Apart from laws, it is necessary to make the public aware of the harmful effects of water pollution and make them aware so that an effective solution can be found to the problem of water pollution.

How to stop water pollution

A look at the methods of water pollution control: