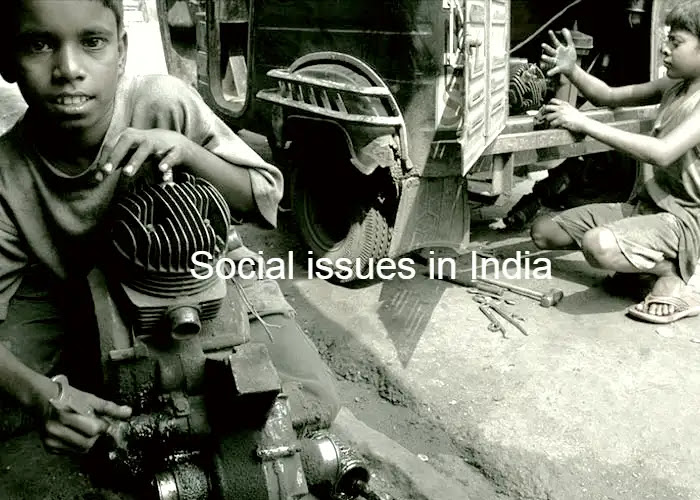 India is an ancient country, according to some estimates, Indian civilization is about 6 thousand years old, so its society is also very old and complex in nature.

India During its long historical period, India has witnessed many ups and downs and arrivals of immigrants; Such as the arrival of Aryans, the arrival of Muslims, etc. These people brought with them their ethnic and cultural polymorphism and also contributed to the diversity, prosperity, and vitality of India.

Therefore, Indian society is a complex mix of diverse cultures, people, beliefs, and beliefs that may have come from anywhere, but is now an integral part of this vast country. This complexity and prosperity have given Indian society a vibrant and colorful culture.

Features of social issues in India

Through child labor, children have to do any work without giving any salary. Child labor is not just limited to India, it spreads globally.

As far as India is concerned, this problem is flawed because since historical times children here together with their parents help them in their fields and other jobs. Common causes like overpopulation, illiteracy, poverty, debt trap, etc. are the main causes of this problem.

Responsibly stressed parents do not understand the importance of normal childhood due to the pressure of their troubles, which leads to substandard feelings and mental balance in the children’s brains, and those who are not ready to start harsh areas or domestic tasks are.

Multinational companies also hire children to work and pay less, which is absolutely immoral. Child labor is an issue of global concern that is also prevalent internationally.

Child trafficking, poverty eradication, and compulsory education, and basic living standards can prevent this problem from increasing greatly. The World Bank, International Monetary Fund helps in the elimination of poverty by providing loans to developing countries.

It is mandatory to strictly implement labor laws to avoid exploitation by multinational companies and other institutions.

India has a largely illiterate population and education is a condition that has become a stain for the development of the nation. In India, illiteracy is almost associated with various forms of inequality that exist in the country.

The government of India implemented a number of plans to counter the threat of illiteracy, but illiteracy still exists due to poor sanitation, expensive private education, and faulty midday meal plan.

Poverty is a situation in which a family cannot meet its basic needs to live; Such as home, clothing, and food. Since the time of independence, poverty has been a predominant concern. We are in the 21st century and poverty continues to be a constant threat in the country.

India is a country where there is a great disparity between rich and poor. It should be noted that, while the last two decades have shown some signs of progress in the economy, these advances are uneven in different regions or parts.

Poverty is widespread in India and growth rates are higher in Gujarat and Delhi than in Bihar and Uttar Pradesh. About half of the population does not have enough houses to live in.

There is no water source in the villages as well as no secondary school and there are no adequate routes. Even some sectors of society, such as the Dalits, have not been included in the poverty list maintained by concerned government-appointed officials.

The element that has made this situation even more complicated and corrupt is the government-funded subsidy system, which has scams, corruption, and leaks in the distribution system, thus failing to reach families according to plan.

According to a UN report, India has the second-highest number of child marriages. Marriage is considered to be a holy union-made by mutual consent of two mature (adult) persons who are ready to accept each other’s responsibilities throughout life.

The Child Marriage Restriction Act of 1929 was the first law to be enforced in all of India except Jammu and Kashmir. This law defines the age of adult boys and girls. Furthermore, sex with a minor is a punishable offense under Section 376 of the Indian Penal Code (Indian Panel Code).

On the other hand, it has been considered that with the end of child marriage, real efforts, strict enforcement of the laws, will still take about 50 years, then the scenario can be changed somewhere.

Hunger is a serious form of malnutrition that, if left unattended, eventually leads to death. Historically, hunger has been stagnant in different human cultures besides India. Hunger is born in any country due to many reasons such as war, hunger, inequality between rich and poor, etc.

Conditions of malnutrition, such as childhood disease, quasi-color, and rickets, are serious problems caused by hunger or starvation. Kwashiorkor and drought occur in situations where people eat a diet deficient in nutrients (protein, minerals, carbohydrates, fats, and fiber).

In the Indian context, it goes without saying that it is a faulty food distribution system.

The Supreme Court, bypassing an order in recent decades, ordered the government to take the necessary measures for the midday meal regimen and the health of pregnant and lactating women.

The National Food Security Bill, which has become a milestone in this act as a measure of its promise to fulfill the promises and actions made in the context of identifying the poor around it, the suffering and disasters, and the children’s rights.

These invoices are also not completely flawless. There is no explicit mechanism defined in relation to the identification of beneficiaries. The poverty assessment indicators needed to be specific, which is not entirely clear from this bill.

Homosexuality is a crime punishable under Section 377 of the Indian Penal Code with a prison term of ten years even today, making it difficult for all people to believe that India is a developing state and that we are residents of the 21st century.

This issue came to light in 2009 when the Delhi High Court legally recognized homosexuality created by the mutual consent of two adults to make it a punishable offense to give way to fundamental human rights violations resulting in homosexual rights. The institutions were born in the form of a struggle for power.

Due to social evils

Furthermore, India has witnessed many large-scale wars; Many foreign invaders attacked India in its long history, some of whom adopted this country and forced them to follow their socio-religious practices, which also aggravated the social situation;

The long-term British government paralyzed the country and pushed it back. Therefore, many reasons can be cited for India’s social problems, but the reality is that we maintain these problems, and only we can solve them.

We present our country as a modern and advancing nation and it is true that India is progressing as a nation in the world, with encouragement and advancement in economic, scientific, and technological fields.

But when it comes to social development, it remains one of the world’s lowest ranking and lowest-ranking countries. According to the 2013 Report of the Indian Human Development Index (HDI), it ranks 135th out of 187 countries. This reflects a sorry state of social indicators in India.

It also shows that even today we are in a society of orthodox beliefs, a negative view of beliefs that do not believe in the principle of equality and brotherhood.

Many government organizations and (NGOs) are working to improve this situation in the social sector, but the results are not encouraging. Perhaps this problem is deeply rooted in the beliefs and beliefs of the people of the country, which is not allowing the circumstances of change to be accepted.

For example: the issue of female feticide is one of the most shameful practices in our country. Although there are many prohibitive measures from the government and the efforts of non-governmental organizations also continue. The real reason for this is the patriarchal system of society in our country in which men are believed to be superior and women their subordinates.

Because of this, the shameful act of female feticide is performed on the desire of the boy rather than the girl. Therefore, people with these belief systems or cultural mindset are an obstacle to rapid change in society.

However, now there have also been many positive changes in society, such as: Now girls go to school in large numbers and their employment rate has also increased, the overall illiteracy rate has decreased.

1 thought on “The most important Social issues in India”