The land of India itself contains infinite mysteries, about which scientists also grab their heads. One of the most mysterious places in the world is the Somnath Temple. 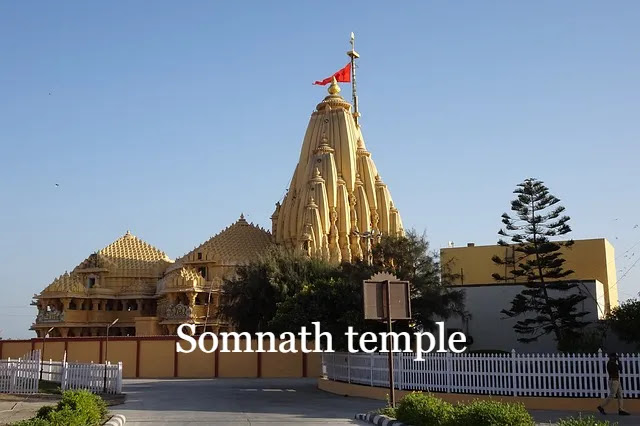 The mystery of the Somnath temple is still unresolved today.

Archaeological researchers from IIT Gandhinagar and four collaborating institutions have made a big disclosure about this. In this research done on the orders of PM Modi, the facts that scientists have put in front of the world are surprising to everyone.

Researchers have reported that a three-story building also exists below the Somnath temple. There is also a network of caves inside. Reports of simultaneous research by archaeological researchers. Has been entrusted to the Somnath Trust

The report states that there is another building of ‘L’ Shep under the temple. It has also been discovered that there are Buddhist caves around the statue of Sardar Vallabhbhai Patel, located at a distance from the Digvijay gate of Somnath temple.

The temple has been tested by modern machines of around five crore rupees, below. An investigation of the DPR, about 40 feet underground, revealed that there is a paved building at the bottom and one of the entrances.

The first Jyotirling of the 12 Jyotirlingas is the Somnath Temple. It is so rich that the first sight of every invader coming from the North West used to go to Somnatha. Several times the Somnath temple was attacked and robbed.

A temple is said to have existed first. The second time in the 7th century, the temple was built by the Maitric kings of Vellabhi. In 725 AD, Al-Junaid, the Muslim Subedar of Sindh, demolished the temple. After this, built it for the third time in 815 AD.

Its remains were built for the fourth time by King Bhoja of Malwa king Bhima Dev of Gujarat. In the year 1026, Mahmud, the chief Ottoman Muslim ruler of Ghazni attacked Gujarat,

The Arab traveler Al Biruni is said to have mentioned this temple in his visit. Seeing this, Ghazni attacked this temple with about five thousand companions. Ghazni looted the temple property in this attack and thousands of people were also killed in the attack.

After this, the fifth construction was done by King Kumarapal of Gujarat in 1169. When the Delhi Sultanate occupied Gujarat in the year 1297, it was again demolished. It was again dropped in 1706 by Aurangzeb.

The new temple was completed in 1951. Even after looting so much property, the pagoda of Somnath stood every time with the same splendor.

Not knowing how many cyclones, how many storms came, but no storm has caused any damage to the temple.

The secret of the arrow pillar 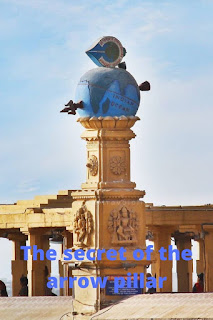 The arrow pillar is periodically built with the temple and one of the many mysteries present in the temple is the secret of this arrow Pillar. Its name mentions the sixth century in history.

Meaning, there is evidence of the existence of this pillar 1420 years ago. This means that the pillar is already present here in the sixth century. Perhaps this is why this pillar has been mentioned in history, but no one knows when it was built. Who had got it done and why it was done, in that column, that secret is hidden which surprises everyone.

According to experts, there is a pillar showing the direction. It has an arrow pointing towards the sea and perhaps that is why it is called arrow pillars. It is written on this column-

I understood in easy language, a straight line should be drawn from that point of the Somnath temple to the South Pole meaning Antarctica. There is not an island in the middle.

Though there is no mention of the plot in the verse, without interruption, the way of the sea means that there is no mountain in the middle. Now imagine that there was neither an airplane nor an end in that land, then how would it have been ascertained that there is no island on the sea route to Antarctica. This is a mystery.

It is a big thing to say that there is not an island in the direction of this pillar. Yes, it can also be known from satellite, but until then no one would have thought about anything like satellite, so how? Then people must have discovered that there is no island in this path. This is a matter of consideration.

This shows how adept our ancestors were in map-making. That too when they did not have any technology nor any apps like satellite or Google Maps.

But the credit of making the first map of the earth is attributed to the Greek scientist Anaximander. But this map was not complete because the North and South poles were missing in that map.

The map showed the same land where the human population was present. While the actual map of the world was made by Henricus Martellus around 1490. That is, many years after the construction of the pillar

Some people believe that when such a pillar was installed, there was no island of any kind, big or small. But nature and geography have changed with time, it must have changed a little bit

But still, it is the biggest thing that the astronomers of that period definitely knew where the South Pole is and the Earth is round and that is why they managed to tell that the sea path from the Somnath temple without interruption directly to the South Pole.

However, it is a mystery as to which technique it was, with the help of which it was easy to know at that time. Now on the western coast of India from the South Pole, the place where the straight line is found without any interruption is installed Jyotirling, which is considered to be the first of the twelve Jyotirlingas of India.

In this, the last line of the verse written on the arrow pillar is also a mystery like the unobstructed Jyoti Marg. Their obstructions and paths are understandable, but what is the path of the light is completely beyond comprehension. This remains a mystery even for scientists.

The Earth is round, this was discovered by some scientists in Europe, but in India, this information was from a very old time. Evidence of this is also found. Later on the basis of such information, Aryabhata told the diameter of this round earth 40’168 K.M around 500 AD.

With the help of today’s state-of-the-art technology, the diameter of the earth has been assumed to be 40’075 kilometers. This means that there is a difference of only 0.2 percent in the assessment of Aryabhata, which is very little.

Now the question arises that from where the information came to Aryabhata about one and a half thousand years ago. Did astronomers even have something like Google Map at that time that they could find out about this? If it was not there, what was the technique by which Aryabhata had discovered the earth, and perhaps the arrow pillar was made using this technique.