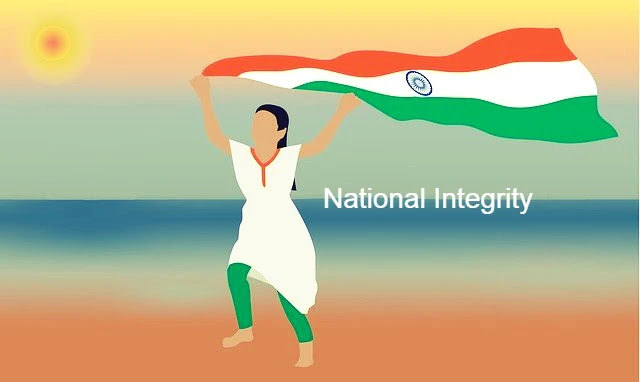 National Integrity refers to the spirit of a nation despite the diversity of different castes, sects, religions, languages ​​, and regions. For the strength and progress of any country, it is necessary to have a sense of unity and harmony among all societies and communities.

National integrity is very important for a large and diverse country like India. National Unity Week or Qaumi Unity Week is organized every year from November 19 to November 25 to make people aware of the importance of national unity. Apart from this, 19 November, which is also the birthday of Indira Gandhi, the first woman Prime Minister of India, is celebrated as National Unity Day.

India is a country where people from different religions, cultures, traditions, and sects live together. Therefore, due to these variations, there is a possibility of differences among people on some issues.

National integrity acts as a thread that maintains unity among people despite all differences. It is the beauty of this country that a festival related to any religion is celebrated with all communities. People visit each other’s places to meet, greet, and greet on religious occasions. This is why India is known as a country with unity in diversity.

Challenges for national unity in India

India is a country of a vast diversity of different languages, religions, and castes, etc. Due to all these characteristics, different groups of people live in India. All castes in India are further divided into sub-castes and languages ​​are divided into dialects. Apart from this, what is most important here is religion which has been divided into sub-religions.

Based on these facts we can say that India presents an infinitely diverse cultural definition because it is a large country with a large population. But at the same time, it is also true that unity among diversity is also visible in India. The major issues affecting national integrity are as follows:

India is made up of people from many different groups, so its diversity has become a latent threat to the unity of the country. Indian society has always been divided in terms of caste, creed, and religions, and languages. That is why the British were successful in their intention to divide India.

During the nationalist movement for independence, these divisive tendencies saw a rise. Finally, the work of exclusion of the British from India was only done by those who were thinking of national integration, such as Mahatma Gandhi, Subhash Chandra Bose, Lala Lajpat Rai, Vallabhbhai Patel, etc. The reason was only possible.

Related:-Women Empowerment in India |Obstacles and the Role of Government

Regionalism or provincialism is also a major hurdle in the path of national integrity. After the independence of our country, the States Reorganization Commission divided the country into fourteen states for various facilities of administration and public. The effects of those divisions are still visible to us today.

The demand for more such states is increasing day by day with new states created on a provincial basis. This has led to a narrow feeling of provincialism in various states of the country, causing social discontent among the peoples

India is a large country where different languages ​​are spoken. While there is nothing wrong with the diversity of their languages, passion for their language, and intolerance towards other languages ​​obstruct the path of national unity.

It is also a fact that people come close to each other only through language, which requires a national language that can connect the whole country together. Unfortunately, till now we do not have a single language that can serve as a medium of communication across the country from Kashmir to Kanyakumari.

The practice of narrow thinking in various religious communities is one of the major threats to national integration. The politics of our country is the main reason behind people becoming prisoners of different regional identities. Even in our country, some states have been formed on the basis of different languages ​​associated with certain religions. Communalism has played an important role in creating differences among people on the basis of religions.

Although our country is a secular country where all religions are respected, communal differences are sometimes coming to the fore, causing great loss of life and property.

Cultural differences sometimes become a major obstacle in the path of national integrity. We can see this clearly as differences between northern states and southern states which often create mutual contradictions and enmity between people.

Casteism is already considered a social evil. People are still divided into their caste identity. Caste is playing a pivotal role, especially in politics. Although the reservation of seats in government jobs and educational institutions has been given to benefit the deprived of the mainstream, it has sometimes seen conflicts and agitations among different castes which posed a threat to national unity. is.

It is often seen that during elections people usually vote based on the religion and caste of the candidate, not on the basis of the merit of the person. After the election, when political power is in the hands of a person or a particular class, then instead of working for everyone, it tries to give benefit to people of their class or their religion.

Along with social diversity, economic inequality is also seen in our country. The rich, whose numbers are not much, are getting richer while most of the poor people are not able to manage their bread for two days.

This growing gap between rich and poor is creating mutual enmity between them. This lack of brotherhood and social harmony is not allowing feelings of national integration to settle in the hearts of the people.

The right kind of leadership is necessary to promote a sense of national unity among all sections of society. But many times it has been seen that social and political leaders try to incite ethnic, provincialism, and communalism to fulfill their vested interests. For example, in Maharashtra, Shiv Sena always tries to promote its political agenda by supporting only local Marathi people and opposing the people coming from outside.

Apart from this, we have very few leaders who have the ability to unite the people of the whole country and the whole of India looks at them with respect.