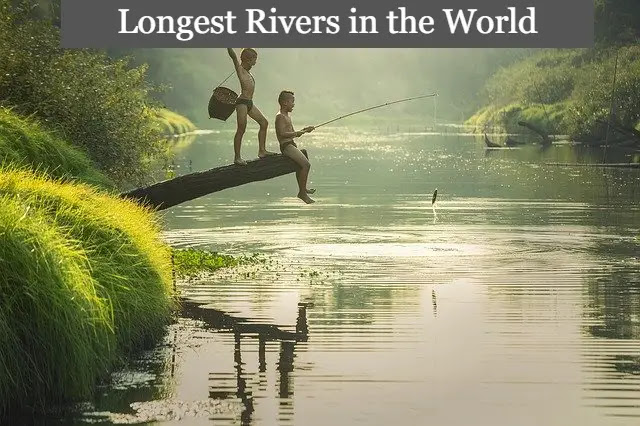 Rivers are an important part of our nature. Along with beauty, this world also provides many plants and beneficial things. It is one of the main sources of water, there are many types of rivers, small and big.

But most of you are always confused about which is the biggest river in the world. Nile or amazon Let us know about the 10 longest rivers in the world to overcome this problem.

Here is a list of the 10 longest rivers in the world with their total length, location, drainage area, drainage name, and countries covered.

Longest Rivers in the World

The Nile River is a huge river flowing in the north of Africa. The length of the Nile is 6,650 km and it is more than all other rivers, so the Nile is the largest river in the world. The river is used by Tanzania, Uganda, Burundi, the Republic of the Congo, Kenya, and several other countries.

There are two types of Nile River, White Nile River, and Blue Nile River. It is a primary water resource for the life of Egypt and Sudan. This river is the birthplace of many types of vegetation and life.

Most people know the Amazon River, but not everyone knows whether it is the longest river in the world or not. The tribals present in the forests around this river are the civilization derived from this river. The width of this river is very large due to which no bridge exists over it which makes it even more special.

The Chinese people use the Yangtze River for war travel and cleaning. The length of this river is 6,300 k.m(3,917 miles) which makes it the third-longest river in the world. It is the main part of the group of three main rivers of China. Although the Yangtze River is clean, it has been getting polluted for some years.

Americans have been living near this river for thousands of years and have also depended on it for their needs and income as pollution has left no one. Therefore, the Mississippi River has also become contaminated and the amount of chemicals in this river is increasing, which is harmful not only for humans but also for other animals.

Many types of flora and fauna are present in the Yenisei River. At present, it is very difficult to survive in the area where it is present. Yenisei River is a very beautiful river in the world but due to the radioactive waste being dumped continuously by humans, this river is getting polluted. We all must think about this.

Therefore the Yellow River is one of the most important rivers in China. Due to the presence of a large number of clay particles in the water, its color appears yellow. The Yellow River is also the economic river of China because it generates a lot of electricity which the people of China and China spend on their work. This river is also one of the most famous and strange rivers in the world.

The Ob River is present in Siberia, Russia, as one of the main rivers in western Russia joined by the Katun and Biya rivers originating from the Altai Mountains. It is the westernmost of the great rivers of Siberia. It is the seventh-largest river of the world with a length of 5,410 km. The Ob River passes through Russia, Kazakhstan, China, and Mongolia.

The area of ​​the valley of this river is 2,990,000 square k.m (1,150,000 sq mi), which you can guess the vastness of this river. The Ob River is a beneficial river and it is used for many things. Water filled with radioactive wastes has been found in this river which was dumped in the lakes which have polluted the beauty of this river.

The name of the Paraná River is derived from the Cuban language which means like the ocean. Due to its vastness, it has been given this name which is quite famous. The Paraná River was first sighted in 1526 by a foreign explorer “Sebastian Cabot”. This river is the source of income for fishermen and is also one of the most important rivers of South America.

The depth of the Congo River is about 720 feet, making it the world’s deepest river. The total length of the “Congo-Lualaba-Chambeshi River is 4700 km(2,900 mi) which is quite a lot. It is the only major river that crosses Ecuador twice. The area of ​​the Congo Valley is about 4 million km, which is 13% of the land area of ​​Africa and this river is the ninth longest river in the world.

Amur River is a famous river present in Argun of Asia. This river is also known as the Kali River. The Amur River is a river on the border between eastern Russia and northeastern China. The largest fish found in this river is Kalinga which is about 18 feet long.

The length of the river amur is 2763 miles (4,444 km). Its depth is about 994 feet. The Amur river later joins the Guria river and then does not meet with any river for 350 km. This river passes through Russia, China, and Mongolia and is one of the longest rivers in the world.

Now you must have come to know which is the longest rivers in the world, which river did you consider to be the longest,  tell us by commenting.

Longest Rivers in the World: QNA

Q:-which is the longest river in the world?

A:- The Nile River is a huge river that flows in North Africa. The length of the Nile is 6,650 km (4132 mi) and it is longer than all other rivers, making the Nile the longest river in the world.

Q:- What is the second largest river in the world?

Q:- Which is the second largest river in India?

A:- The Godavari River is the second-largest river in India which is also known as the Dakshin Ganga. The total length of the Indus River is 3,610 km. The Indus River within India is only 1,114 km long.

Q:- Which country has the most rivers?

A:- Bangladesh has the largest number of rivers, that’s why Bangladesh is also called the country of rivers.