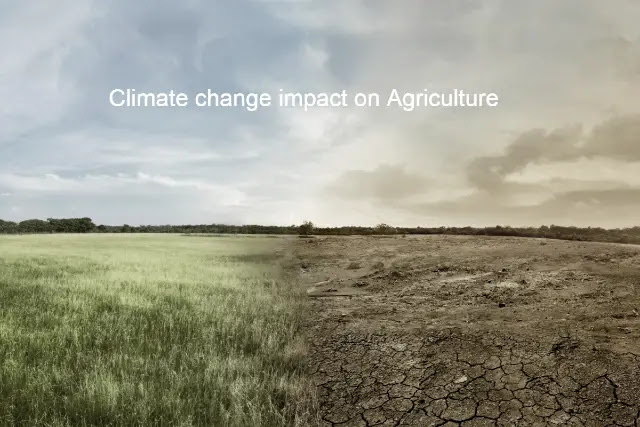 Climate change has become a topic of debate between developed and developing countries on the international stage. It may be the only informative or educational topic for people who make a living from daily struggles, but the truth is that this problem, which negatively affects the air, water, agriculture, food, health, the means of life and housing, etc. we all have the opposite effect in life.

Rising average temperatures, hot weather, and other weather conditions are not limited to any specific community or region. If the population in coastal or island areas is affected by rising sea levels, farmers are experiencing a water crisis and an abnormal monsoon.

Residents of the coastal region are affected by catastrophic storms, people in many areas suffer from droughts and floods, strange weather-related diseases, and people who have lost their homes in devastating floods migrate to other areas. They are forced to do so.

In fact, the entire world is facing the challenge of climate change. Climate change is having an adverse impact on agriculture. Most food crops are grown within a certain temperature range.

For example, wheat at around 15 ° C, corn at 20 ° C and rice at 25 ° C. Therefore, any change in temperature due to climate change represents a threat to the number of grains and the quality of crops.

Impact of climate change on crops

The potential impact of climate change is visible in the agricultural sector. Climate change will not only affect crop production, but it will also negatively affect their quality.

The lack of nutrients and proteins will be found in cereals, so the health of humans will suffer even after eating a balanced diet and this deficiency will be compensated by other artificial options. Due to the increase in temperature in the coastal areas, the production of most crops will be reduced.

There will be mainly two types of climate change impacts: one field-based and one crop-based. Therefore, it will have different effects on different crops in different regions.

Rice and wheat are the main food crops in our country. Its production will suffer many losses due to climate change which is as follows:

The eastern part of the country will be further affected by rice production as the number of cereals will be reduced. Rice is a rainfed crop, so if flood and drought conditions increase with climate change, the production of this crop will be more affected than wheat.

Studies have shown that in most places wheat production will decrease if the temperature rises to around 2 ° C. This will have less impact where wheat productivity is high (in northern India), although climate change will have a greater impact in areas where there is less productivity.

If the temperature rises by 1 centigrade, wheat production will decrease by 4-5 million tons. If the farmer sows wheat in a timely manner, the drop in production can be reduced by 1-2 tons.

Impact of climate change on animals

Apart from the impact of climate change on agriculture, its effect is also seen in animals. Its possible effects are as follows:

The increase in temperature affects the growth, health, and production of the animals. Due to the heat, stress increases in them, which reduces their productivity and increases the chances of contracting diseases. It is estimated that milk production may decrease by 1.6 million tons by 2020 and 15 million tons by 2050 due to the increase in temperature.

Changes in the amount, intensity, and distribution methods of precipitation in the coming years can reduce conception rates, increase the temperature and intensity of heatwaves, affecting the life cycle of animals in sensitive stages.

The worst decrease would occur in hybrid cows (0.63 percent), buffalo (0.50 percent), and domestic breeds (0.40 percent). Hybrid breeds of species are less tolerant of heat, thus their fertility and milk production will be the most affected, while indigenous breeds will see less impact from climate change.

Changes in the distribution of heat and rain can lead to anthrax, black quarters, hemorrhagic septicemia, and vector-related diseases, which thrive in the presence of moisture.

Changes in temperature, rains, droughts, storms, and floods can have a significant impact on the life of a fish. Some commercially important species cannot tolerate these extreme conditions.

About 71 percent of the Earth is covered in water, of which 97 percent is in the oceans. Only 136 thousand cubic meters of water remains for human consumption.

Water comes in three forms: liquid found in oceans, rivers, ponds, and groundwater; solids, which are in the form of ice and gas, which are present in the atmosphere by evaporation.

Water consumption in the world doubles every 20 years, while the amount of water available on Earth is limited. Too much water is wasted in agriculture and industries in urban areas. It is estimated that if properly organized, water can be saved between 40 and 50 percent.

Due to climate change, there will be a serious water supply problem for farmers and the frequency of floods and droughts will increase. In semi-arid regions, prolonged dry weather and loss of agricultural production will increase.

Not only this, but the danger of the availability of water for irrigation can also be felt due to the increase in water intensity, salinity, floods, urban and industrial pollution in large rivers.

The importance of groundwater is the most important in our lives. In addition to drinking, this water is used for both agriculture and industry. The traditional sources of water in the villages are almost exhausted. The village ponds were helpful in keeping the water level well.

Farmers used to store more and more rainwater in their fields to keep the soil moist and fertile, but now due to the availability of tube wells and cheap electricity, farmers have stopped conserving water in their areas.

With the population increase, it is natural that the demand for water has increased, but due to water pollution and lack of proper water management, water is becoming a problem today. Climate change will increase the shortage of drinking water worldwide.

Impact of climate change on the soil

Like other components of agriculture, the soil has also been negatively affected by climate change. The soil was already contaminated by the use of chemical fertilizers. Now, due to the increase in temperature, soil moisture and efficiency will also be affected. Soil salinity will increase and biodiversity will decrease.

Lowering the groundwater level will also affect the fertility of the land. Soil erosion will be more due to accidents such as floods but due to drought, there will be sterility. Fertilized soil degradation will help make the area barren due to declining plantations and a lack of biodiversity.

Impact of climate change on diseases

Climate change negatively affects the development of pesticides and diseases. Due to temperature, humidity, and atmospheric gases, there will be an increase in the reproduction of plants, fungi, and other pathogens and changes in the interrelationships of insects and their natural enemies.

Hot weather is helpful in increasing the fertility of insects. The reproduction of many pesticides in the summer and fall seasons in the spring completes the life cycle, keeping the larvae alive by hiding somewhere in winter.

Changes in air direction increase the number of bacteria, fungi, and germs in the air. For its control, a large number of pesticides are used, which gives rise to other diseases. Similarly, diseases begin to increase in animals.

Impact of climate change at a glance

Its direct effect can be seen in the standard of living and lifestyle of the rural farming community. Farmers have been forced to move to other occupations due to losses suffered in agriculture. The yield on the farm increased, but the cost was several times higher, causing a surplus crisis.

The cycle of crops, irrigation, and harvesting seasons changed due to the reorganization of the summer, winter, and rainy seasons, and the initial agricultural pressure has led to a greater dependence on motor vehicles than on animals.

Climate change can have an impact on agriculture. The immediate and far-reaching effects of climate change need to be studied. We must do two things in this area immediately: one has to find out what effect the climate cycle is having on climate change and the second, can we offset this change by promoting some alternative crops?

We should develop crop varieties that are capable of coping with the threats of climate change. One that can tolerate more heat and colder and can cultivate. The impact of climate change can be reduced by adopting proper agricultural practices. To do this, the government, agriculture departments, and farmers around the world will need to work together.