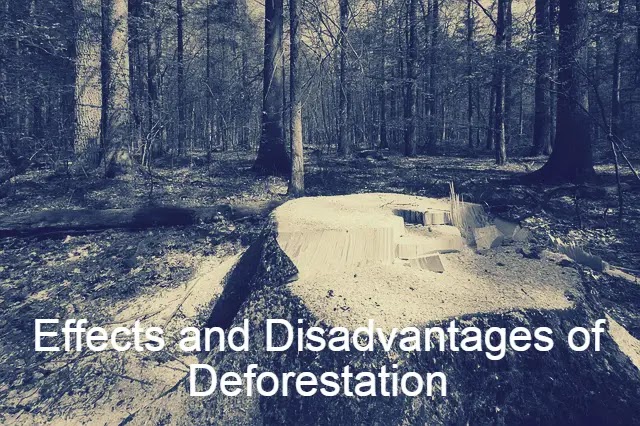 In modern times today, forest destruction has increased with an increasing population. People do not know that trees are our life. We get life-giving air (oxygen) from trees and forests to help us meet our many needs.

Rain is caused by forests, but due to the rapid increase in population, humans are destroying forests indiscriminately for their needs. That is why the existence of forests is in danger today. As a result, human life is also in danger. Let us try to know today what are the effects and disadvantages of deforestation.

According to one estimate, forests of 10 million hectares are cleared each year in the world. In India alone, forests spread over more than 1 million hectares are being cut. The pressures of urbanization, increasing population, and the rapid development of hunger have deprived us of green life. If the forest is cut in this way, in the future we may have to suffer heavy losses.

Illegal felling of trees is done in the forests. On one hand, the government is spending millions of rupees for environmental protection, on the other hand, the mafia in the forest are cutting trees day and night. It seems that the wood mafia cuts trees out of revenge and does not want to leave its business.

Deforestation leads to loss of soil, water, and air, resulting in a loss of over 16,400 crores per year. Deforestation has the opposite effect on land productivity. It has several effects:

Forest clearing on mountainous slopes impedes the flow of rivers to the plains, which has an effect on water efficiency, as a result of which the water does not descend rapidly.

Deforestation leads to land degradation as trees play an important role in maintaining the surface of the hills and create natural barriers to the rapid growth of rainwater. As a result, the water level of the rivers suddenly increases, causing flooding.

When the amount of fuel is insufficient, cow manure and vegetable waste are used to produce food as fuel. Because of this, each part of the tree is used slowly, but the soil does not receive nutrition. Repeating this process repeatedly affects soil productivity, causing degradation of soil fertility.

With deforestation, rainwater drags the fertile soil over the soil to places where it is not used.

wildlife is disappearing due to forest destruction. Many species have disappeared (for example, the Asian cheetah, the Namdapha flying squirrel, the Himalayan wolf, the Elvira rat, the Andaman shrew, the Jenkins shrew, the Nicobar bird, etc.) and many are on the verge of extinction.

the consequences of deforestation are very serious. Its greatest loss is seen in the form of air pollution. Where there is a shortage of trees, the air is polluted and the problem of air pollution is the highest in cities. People in cities suffer from many diseases, especially respiratory problems such as asthma.

The desert is expanding on a large scale due to the continuous depletion of the forest area and the erosion of the land.

today the river water is shallow and polluted due to the indiscriminate cutting of trees and plants on its banks and mountains. Due to this, the rain is insufficient, which pollutes the water source, and the environment is also polluted and is fatal to breathing.

8. Side effects of industrialization

9. Damage to the ozone layer

Earth’s normal living environment has been polluted as a result of deforestation. It is a serious threat to the ozone layer that is necessary to protect the entire Earth. It is very dangerous to even imagine that bad day (may God never come) when the ozone layer disappears.

Today due to indiscriminate deforestation, mountains and forests are deserted. Because of this, it has become rare to obtain medicinal plants.

Priceless natural property is being rapidly destroyed due to a lack of plantations. It is eroding the balance of life and the environment. Mountain rocks are breaking due to the demand for stones and the rain in the surrounding areas is also decreasing.

Due to endless deforestation, destitute animals take refuge in villages. As a result, the incidence of wild animals entering the towns and cities of the country is becoming very common, which is a serious threat to human life.

12. The decreasing number of tribes

the existence of tribes is necessary for the forest. Modern society thinking has made life a profit goal, but for tribes, the forest is a complete lifestyle. It is their livelihood. His focus is very important in forest conservation, which is neither implemented nor recognized.

They have been protecting the forest since the time of their ancestors. The tribes take the land they need and in return give them something. He has a deep respect for the forest. The tribes’ methods and rules for using the forest are inherently permanent because the protection of the forest is in their blood.

It is noteworthy that the forest is not only the economic base of the tribes, but they also use wild herbs in the treatment of their diseases. Knowledge of the “rebel tribes” of the Mandla and Dindori districts is considered the best for herbal and herbal remedies across the country.

Rebel tribes use the bark of trees during childbirth. Before removing the bark, they offer rice, legumes to the trees, and then worship the tree with incense and mantras in praise of the true god. After this, they remove only the tree bark from their tools that can be used as medicine. According to this tribe’s rule, only a small bark is removed in this way. They believe that if the bark is removed without this rule, people will start using it their way.

Today the forests are being cut indiscriminately, resulting in seasonal changes, heat in the soil, depletion of the ozone layer, etc. Our development process has displaced thousands of people from water, forests, and land. In this important situation, protecting the forest should not only be our duty but also our religion.

Let us all pledge to stop the indiscriminate felling of trees and make our invaluable contribution in saving the forest. If we really want to protect the forest heritage for generations to come, it is very important to understand and prevent the effects and disadvantages of deforestation. Instead of thinking about making a profit from them, the idea of ​​saving forests for life would have to be developed.