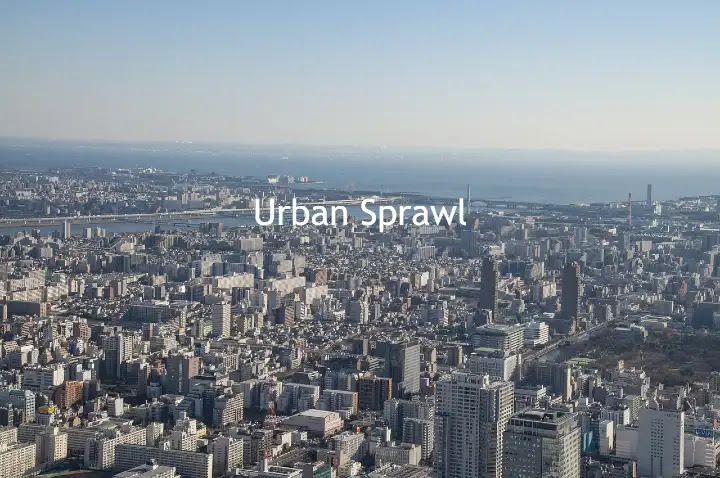 The population was not a concern for humans or governments all over the world because we all had sufficient space to spread, farm, and meet our daily needs.

According to NASA, some of the leading problems for Urban Sprawl have been identified by the multiple satellites launched by them. However, NASA regretfully agrees that such information is not accessible for most urban planners even today.

Urban Sprawl can be defined as the exploitation of agricultural land and forests to build residential areas for human consumption.

When the space revolution started in the 1950s, humans were hoping for new planets which they can use in their homes. However, the development of science and our knowledge about the universe made one thing clear: the only planet in space where humans can live without the help of additional machinery is our planet earth.

This probably is the major turning point in realizing the fact that our planet is very important for the survival of the human race. The space revolution era was the beginning of one of the major crises of mankind, the population explosion which caught the entire world today.

The major cause of Urban Sprawl

The major cause for urban sprawl is none other than the population explosion that we are facing today. During World War II, most of the leading cities in the world were at tag by armies and there was an increasing trend after World War II: people wanted to move from cities and settle in suburban areas which are greener.

People wanted to experience nature and wanted to live close to it. However, the dream of people to live closer to nature was hampered very quickly when developers decided to “develop” the rural land to make it a “better place”.

There came development, automobiles, shopping malls, and many other building structures, and the land area compromised in building all these structures they’re mostly the agricultural land or forests.

The development has been intense in some countries leaving more than 70% of the agricultural land into complex urban structures. The extravagant development of modern civilization is leaving no room for farmland and wildlife, threatening our natural resources severely.

How does urban sprawl affect the environment?

We no longer have access to some of the biggest things on our planet that we use often: as a result, they have an adverse effect on the environment.

Most of us have learned about photosynthesis, the process where plants absorb carbon dioxide from the air to create food and leave oxygen as a part of the process.

When complex urban structures are developed by cutting down trees, we naturally have more polluted air. The intensity of pollution further increases from smoke emitted by automobiles, industries, and room heaters. Hazardous gases emitted by these complex machines worsen air pollution.

The major reason for food scarcity in several countries is caused by lack of agricultural resources and farming. Since the available land for farming is extremely low, many countries fail to produce sufficient food to meet the requirements.

A good number of developing countries are already facing this problem.

Not only that urban sprawl destroys our natural resources for energy, but it also increases our energy requirements but without leaving a solution to meet the same.

The increased consumption and lack of energy resources are creating severe threats in many countries, leaving urban development in question.

Global Warming, the biggest crisis humans have to face, is fueled by urban sprawl. Since there are no forests or farmlands to absorb sunlight and restrict the spread of hazardous gases and temperature is dramatically rising each year.

Why Governments Are Worried About Urban Sprawl?

These are the major problem that governments have to handle today. People who live in the suburbs are heavily dependent on automobiles because other modes of transport will not be available or are scarce in residential areas. If a family has two adult members, both of them you’ll be using some sort of automobile only to reach their destinations.

This will cause a lot of air pollution and then several thousands of people are commuting the same way, the percentage of population-level increases significantly. Some countries are constantly developing suburban transport systems but at the moment, public transport is the least feasible option in many places.

Automobile dependency is considered disordered because people who are habituated to commuting on their automobiles have the tendency of using them even for short distances.

Job Sprawl is a direct result of urban sprawl, taking event the intensity of jobs and completely altering the geographical pattern of job locations.

Job dispersion forces people to travel a lot, just to get to their places of work. This is also the reason for the increased usage of automobiles.

Since extensive transportation to record even to deliver the necessary items, cost-of-living factors in suburbs are constantly increasing. This is a major headache for people who settled in suburbs.

Urban sprawl is definitely having an impact on nature, destroying wildlife and agricultural lands. It is believed that many thousands of plant and animal species will die by the end of the 21st century if urban sprawl is continued at this rate.

As most of us are already aware, fossil fuel prices are going up each day, which has a strong impact on suburban populations who have a heavy dependency on automobiles.

The dream of an average suburban settler, who dreams of a peaceful location to live is on serious threat because the ever-increasing traffic is posing them a serious challenge on their regular commute.

Similarly, the level of pollution is constantly increasing and already developed suburban areas started facing resource scarcity. In many developing countries, the energy crisis is a major problem in developed suburbs. It goes without saying that this trend will seriously damage our ecosystem, our natural resources for food and water, among many other things.

This is why Urban Sprawl is considered a serious issue. In many countries, governments started to take serious measures to prevent urban sprawl.