Friends, have you seen a temple where the established Lord’s idol contains the real heart of that God. Yes, you heard it right. It is said that when a new idol is placed in the place of this idol, then that day is removed and installed in the new idol, and during this time the power of the entire city is turned off.

So that no one can see this heart and if someone accidentally sees it, then he dies. Hello friends, today we will talk about those 10 mysteries of the world-famous Lord Jagannath established in Puri, which even the science world could not solve till today. 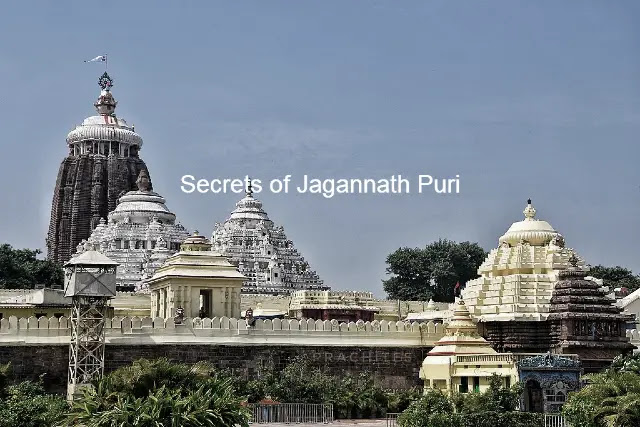 1. The flag installed above the Lord Jagannath temple always waved in the opposite direction of the wind. Now for what reason this happens, it has not been known to date.

Along with this, there is a rule to change this flag every day.
It is believed that if this flag is not changed on any day, the temple will be closed for the next 18 years.

2. This temple is spread over an area of ​​4 lakh square feet and its height is about 214 feet.

It is impossible to see its dome by standing near the temple and a deep secret is hidden in its shadow because the shadow of this dome is always invisible.

3. A Sudarshan Chakra is placed above the temple. It is said that you can stand anywhere in Puri. You will be able to see this cycle.

The structure of this chakra is so amazing that if you look at it from any direction, it will feel like it is right in front of you. The chakra is made of Octal metal and is considered very sacred.

4. On normal days the wind comes from the sea towards the land and vice versa during the evening but vice versa in Puri. Here the air goes from land to sea.

5. Generally birds are seen sitting in the temple mosque or any big building but no bird has ever been seen flying at the Jagannath temple.

This is the reason why flying airplanes and helicopters from above the temple are also prohibited.

6. Friends, you will be surprised to know that every evening the flag installed above the temple is replaced by a human climbing upside down. Yes, you have heard exactly right. Everyone who climbs here is not straight but climbs upside down. The flag is also so grand that when it is waving, it is left on sight. Shiva’s moon is also built on the flag

7. The Jagannath temple is said to have the largest kitchen in the world.
500 cooks and 300 co-workers work in this kitchen. A secret associated with this kitchen is that even though lakhs of devotees come here, the prasad never diminished, but as soon as the time of the temple gate closes, the prasad itself ends.

The most surprising thing is that the utensil that is at the top i.e. the seventh number utensil is prepared first by offering it. After this, the sixth, fourth, third, second, ie the first vessel which is in the bottom, in the last, i.e. the last Prasad is prepared.

Related:-Stambheshwar Mahadev Temple in Gujarat: The Secret Behind the ‘Disappearing Temple’

9. Three idols of the Jagannath Puri temple are replaced every 12 years. New sculptures are installed at the site of the old statue. There is also an interesting anecdote associated with this process of changing the idol.

When the idols are replaced, the electricity of the entire city is cut off. The temple is completely darkened around.CRPF security is deployed outside the temple.

10. Friends, you will be surprised to know that when Lord Krishna sacrificed his body and was cremated, his entire body, except for one part of the body, merged into the five elements.

It is believed that Lord Krishna’s heart still beats like a living human. It is said that the heart is still safe and is seated inside the wooden statue of Lord Jagannath.

Friends, if you have ever visited Lord Jagannath in Puri’s Jagannath temple and have seen these miracles with your own eyes, then you will definitely share your experiences with us.