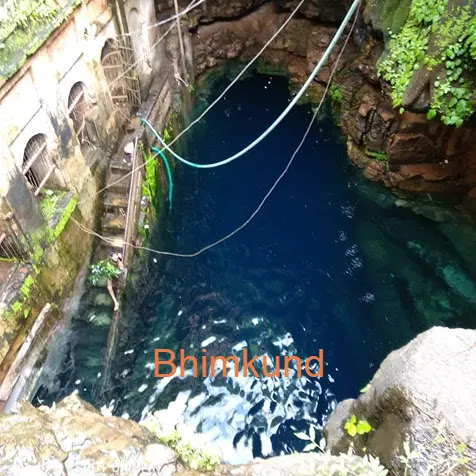 There is a pool in India that seems easy to see, but its specialty is that whenever there is a natural disaster in the Asian continent, the water of this pool automatically rises.

This Kund is mentioned in the Puranas by the name of Neelkund while people know it as Bhimkund. It is said that Discovery Channel tried hard to measure the depth of this tank but they could not find its depth.

Bhimkund is a famous pilgrimage site, near Bajna village, 77 km from Chhatarpur district in Madhya Pradesh, where there is a cistern which is a matter of curiosity for geologists.

Looking at the Bhimkund from above, this Kund(tank) looks 50 to 75 meters wide. Researchers have dived many times in this water tank but no one has been able to get its depth so far.

According to old stories, Bhimkund belongs to the Mahabharata period. The forests and mountains used to be a shelter for the Pandavas during the unknown. Due to the absence of a reservoir for several days, one day the water they had was exhausted. Meanwhile, Draupadi was thirsty after reaching a mountain, so she expressed a desire to drink water but there was no water source far and wide.

Bhima strikes his mace, the ground collapsed in the middle of the mountain, and the torrent of water bursts. Then the Pandavas including Draupadi drank water. It was named Bhimkund because of its construction by Bhima.

Apart from this, this Kund is also known as Neelkund(blue pool) or Naradakund (Narada’s Pool). It is said that at one point Naradji was crossing the sky, at the same time he saw a woman and a man injured. When he got there and asked the reason for his condition, he said that he is the Raga-Ragini of music. They can only be right when someone skilled in music sings them a song.

Naradji was a master of music. At the same time, he sang the song that all the gods began to hear. Lord Vishnu was also pleased to hear the song and transformed it into a water tank. Like his color, the water in this tank became blue, since then it is also called Neelkund.

The depth of Bhimkund remains mysterious even today. No one could measure its depth to date. Many people tried to measure its depth in many ways but failed. Bhimkund is believed to have been formed due to the strong current flowing in the ground.

But to date, no geological scientist could find out from which water source this water stream is connected.

You must have seen that when a person dies by drowning, after some time, his body comes over water. But the dead body of the drowner never looks up in this tank. Rather than the person disappears forever. People say that whenever a natural disaster occurs, the water level of the tank starts rising so that the people here already anticipate the natural disaster.

During the earthquakes in Nepal and Gujarat, the water level also increased here. When there was a tsunami in 2004, around 15 meters high waves had erupted in Bhimkund at that time, after which this country was in the news of foreign media.

However, he did find some strange and extinct aquatic animals in the depths. It is said that when the divers reached the depth of 80 feet in this pool, they found streams of strong water which probably connected it to the sea.

Discovery Channel reported that there are 2 ponds in the water depth. Water comes out from one and flows to the other, due to which there is a strong flow. The water level of this cistern is never reduced.

Once 9 divers of the Indian Army tried to measure its depth but they also failed. Not only this, in 1977, the district administration also tried to evacuate it by installing three pumps here But in this work which lasted for seven days, the water of the tank did not decrease by an inch.

The mystery of Bhimkund, who has not been able to raise the curtain to date

The specialty of Kund is that its water always appears clear and transparent blue color, due to which things can be seen to a very deep extent. It is said that its water is the mineral water of the same quality as Himalayan water.

Friends, what do you think can happen under this pool? Which even the greatest scientists could not know. Please let me know by commenting. If you like the article, do share it.

1 thought on “Even Bhimkund mystery scientists could not measure its depth.”