Kiradu Temple is located in the Barmer district of Rajasthan. Kiradu is famous all over the world for the craftsmanship of its temples. These temples were built in the 11th century. Kiradu is also known as Khajuraho of Rajasthan.

But Kiradu could not get fame like Khajuraho. Because this place has been deserted for the last 900 years and even today there is some movement here during the day, but in the evening this place becomes deserted. Nobody stays here after sunset. 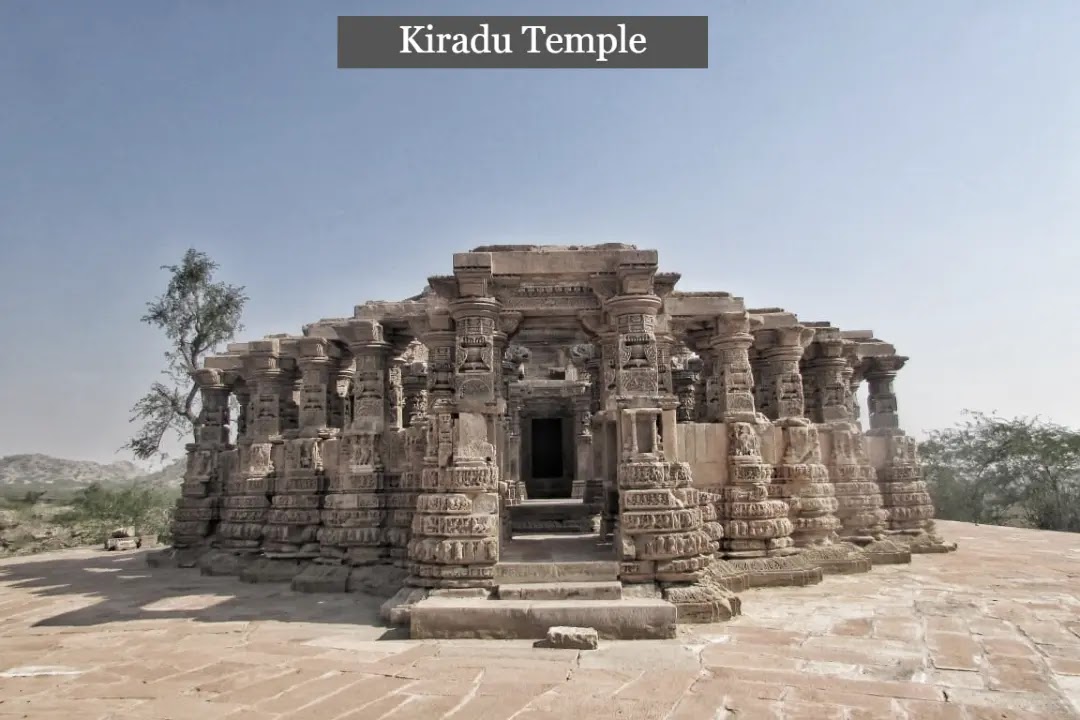 The Kiradu temple is full of mysteries. There are many amazing secrets here. That is far from the eyes of us and science. Many attempts were made to unravel these mysteries. But so far this mystery remains unsolved.

People believe that whoever stays in the Kiradu temple at night turns into a stone. And some say that the Kiradu temple is haunted by a ghost. However, what is the truth behind it, Whose mystery has not been solved to date?

There used to be five temples in Kiradu. But today only two temples are safe. Kiradu is Barmer’s most famous tourist destination. It’s recognized. In this fort, people can hear voices in the nighttime.

It is believed. That the Kiradu temple has been cursed by a sage. And for the past few decades, this fort is deserted. Entering this fort is like feasting on death.

According to the historians of Rajasthan, the city of Kiradu was a developed state with amenities in its time. People from other states used to come here to do business.

But in the 12th century when Kiradu was ruled by the Parmar dynasty. This city becomes deserted. Why does this happen after all? No concrete information about this is available in history, but a story about it is popular with a lot of noise, which is something like this.

It is said that a few years after the construction of these temples, this village was cursed by the sadhu. And all the people became like stone idols. In this incident, thousands of people lost their lives due to this curse.

It is believed. That all the cursed souls are still in that town. And it has been experienced many times. Today nobody lives in that town. Because the one who goes to this town at night. He becomes an idol.

Many efforts were made to know the secret of this fort and town. But to date the secret of Kiradu is hidden. People do not enter this city out of fear. Sometimes during the day, some travelers come to this secluded place. Today Kiradu temple has become a haunted place.

About 900 years ago the Parmar dynasty ruled here. In those days a learned monk had also come to live in this city. After spending a few days here, the monk went on a tour of the country and left all his disciples with the help of the local people. One day all the disciples fell ill and no one took care of them except an old lady.

When the monk came back, he got very angry seeing all this. The sage said that where there is no sense of mercy, the human race should also not be there. He cursed the entire city dwellers to turn into stones.

The lady who had served his disciples, the monk asked him to leave before evening and also warned him not to look back, but after walking some distance, the lady looked back and she too has become of stone.

Kiradu temple lady statue can be seen even today in Sihani village, situated some distance from the temple. That stone statue of the woman is considered to be the proof of this incident.

After this curse, if someone stayed in the city after evening, he would have turned to stone and this is the reason why this city becomes deserted after sunset. Now I don’t know how much this story is true and how much is wrong.

There is no concrete information available in history about who built the temple of Kiradu. Historians believe that the temples of Kiradu were built in the 11th century and were built by “King Dushalraja” of the Parmar dynasty and his descendants.

Although three inscriptions of the 12th century are available on the Kiradu temple, there is no information related to their construction on them.

First inscription – Vikram Samvat 1209 Mangavadi 14 is accordingly dated 24 February 1153, which is from the time of Chalukya Kumar Bal of Gujarat.

Second inscription – Vikram Samvat 1218 AD 1161, in which the lineage of Parmar Sindhu Raj to Someshwar is given.

Third inscription – This is of Vikram Samvat 1235, which is of Madan Brahmadev, a feudatory of a Chalukya king Bhima Dev II of Gujarat.

Friends, history tells that there was once a series of five grand temples in Kiradu, but due to the earthquake at the beginning of the 9th century, these temples were badly damaged and they could not be maintained due to deserted for the second century. Today out of these five temples, only the Vishnu temple and Someshwara temple are in good condition.

Someshwara Temple is dedicated to Lord Shiva. The structure of this temple dedicated to Lord Shiva is worth seeing. Standing on many pillars, this temple is reminiscent of the Meenakshi temple from the inside, while its outer cover gives the feel of the Khajuraho temple. The carvings of elephants, horses, and other figures on black and blue stones add to the beauty of this temple. Lord Shiva’s pavilion built in the inner part of the temple is also excellent.

Someshwara Temple is the largest temple in Kiradu. It is believed that the architecture of this place started from the Vishnu temple itself and the Someshwar temple is considered to be the end of the flourishing of this art. 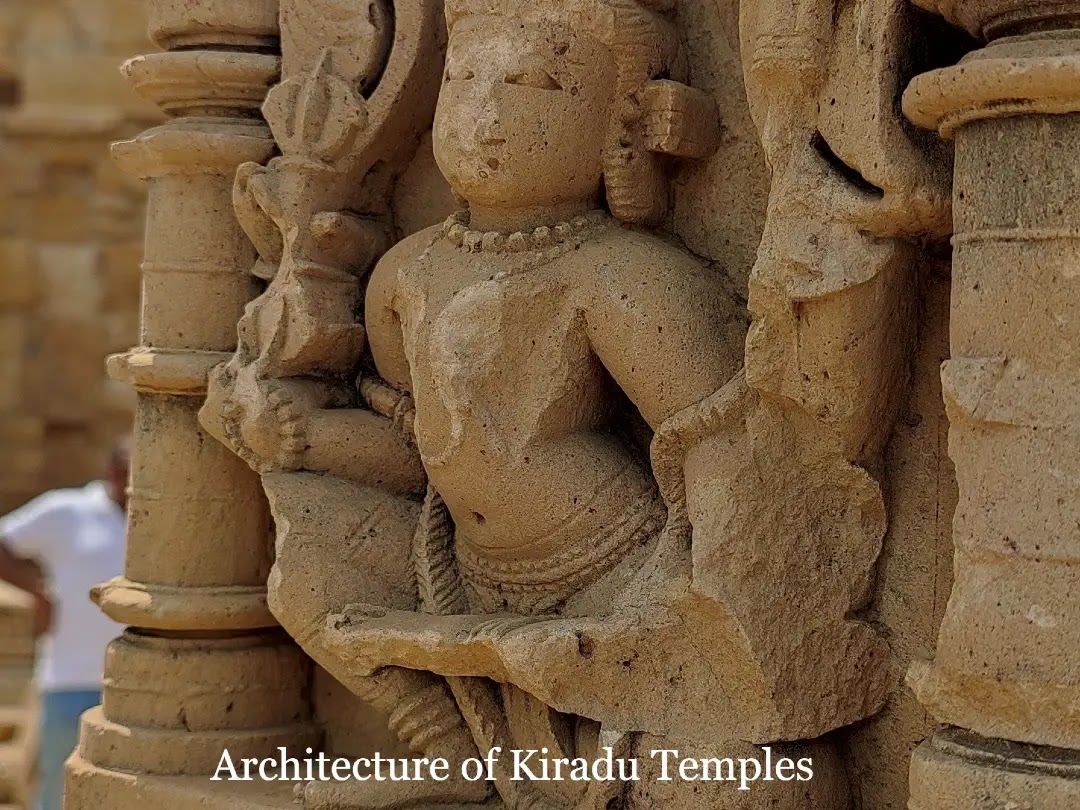 Talk about the sculptures of Kiradu temples Barmer, it is famous for amazing architecture. Looking at these ancient temples, it seems as if one has reached a wonderland of beauty.

The artifacts made on the stones of the temples of Kiradu are seen telling the stories of their wonderful and unmatched past. The architectural crafts built around the ruins present the skill of the artisans of that period. The architectural style from the foundation stone to the roof stone is amazing.

Gaj Dhar, Ashwa Dhar, and Nar Dhar Nagpas built in the support of the temple, churning the ocean from the pass and chasing the golden deer, the stone idols of Lord Shri Ram seem as if they are going to speak now. It seems as if these idols are together making you feel like yourself.

The second temple in the Kiradu range is dedicated to Lord Vishnu. This temple is smaller than the Someshwar temple but is very rich in architectural and artistic points of view. Apart from this, there are three other temples of Kiradu, although these temples have been turned into ruins even today it gives a pleasant experience to visit them.

If the government and the Department of Archeology pay attention to the development of Kiradu, then this place can develop into a great tourist destination, then it was the secrets and history related to Kiradu temple.