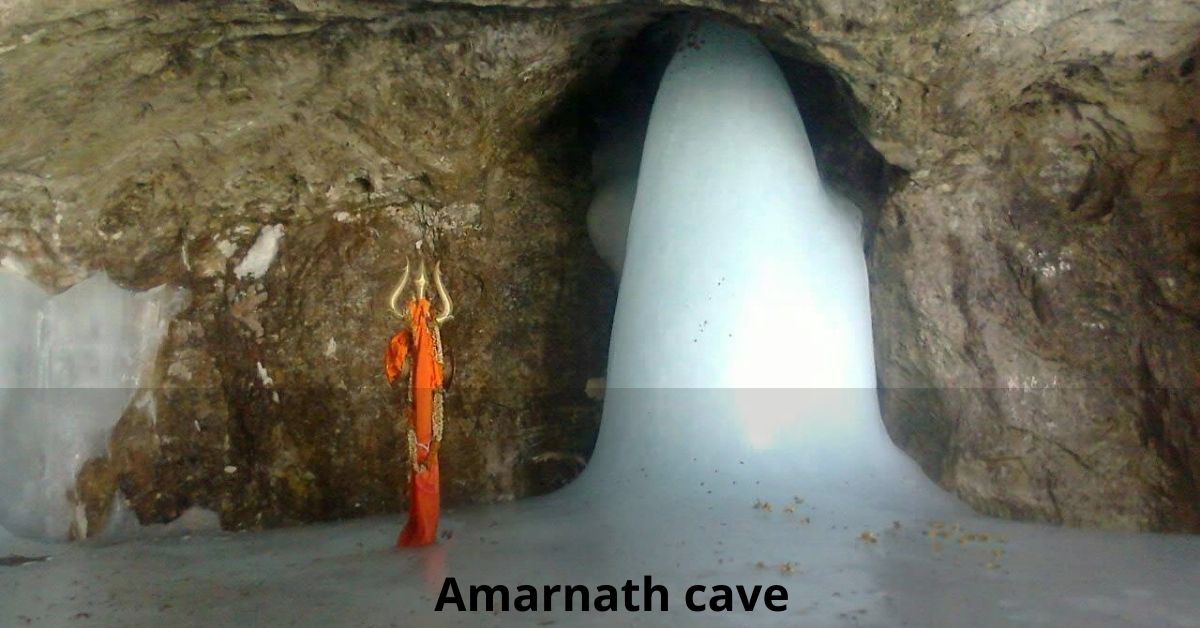 What we are seeing in front, if we look at it from the religious point of view, then it is clear that here Lord Shiva himself takes the shape of an ice Shivling every year in the form of Amareshwar Mahadev.

But from a scientific point of view, the matter is very complicated, because to date even the world of science has not been able to find out why the ice takes the form of Shivling only at a certain place in Amarnath cave (except all other places). Scientists tried again and again to know its secret but they were unsuccessful.

A pair of two pigeons lives near the cave of Amarnath. One who never dies. Why is the snow Shivling formed in this cave? Why do people travel here? After all, what are the mythological beliefs behind this Shivling? And after all, why two pigeons living here are called immortal? Along with this, we will tell you what is special in this year’s Amarnath Yatra.

Amarnath Cave is located in the Himalayan mountain range at a distance of about 145 km from Srinagar. Its height above sea level is about 3978 meters. This cave is 150 feet high and about 90 feet long.

The Shivling of Amarnath cave is called Amareshwar. The journey here starts in the month of July and lasts till the first week of August if the weather is good.

It is believed that Lord Shiva first came to this cave on the full moon day of the month of Shravan, hence the pilgrimage to Amarnath got special importance on that day. On the full moon day of Rakshabandhan, Chhari-Mubarak is also installed near the snow Shivling built in the cave. The circumference of the cave is about 150 feet.

In the center of the cave, a bubble of ice first forms, which grows little by little every day for 15 days and becomes more than two yards high. With the decrease of the moon, that event also starts and when the moon disappears then the Shivling also disappears.

What is it that the effect of the moon falls on this Himling? There are also other caves where water falls drop by drop but why not all take the form of ice lingam. Many more small and big caves are seen while moving on the path of the Amaravati river. They are all covered with snow and water keeps dripping drop by drop from the roof there but no Shivling is formed there. 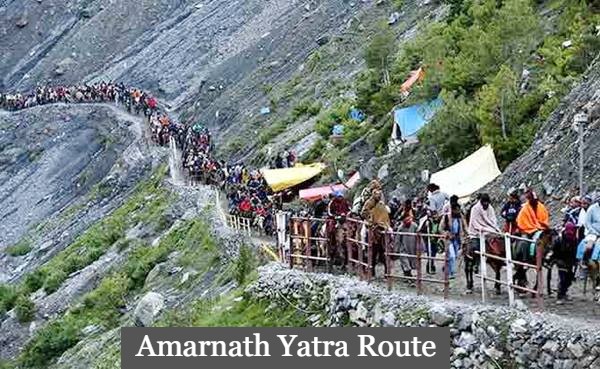 There are two ways to go on Amarnath Yatra. One goes through Pahalgam and the other route goes through Baltal which has to reach Pahalgam or Baltal before any region across the country. This journey is about 36 km from Anantnag district and the traditional Pahalgam route 14 km from Ganderbal district to Baltal route. After this, the journey is done on foot.

By Rail: The nearest railway station from Pahalgam is Udhampur which is about 217 km away. But the Jammu railway station is more well connected to the entire country than Udhampur. From here trains run to all the major cities of the country.

By road: Amarnath Cave is located in a hill station. There are no direct road installations from anywhere in the country. To get to Amarnath by road, you first have to go to Jammu and then travel from Jammu to Srinagar. From Srinagar, you can choose between Pahalgam or Baltal. Amarnath’s sacred journey begins in these two places.

By air: The closest airport to Pahalgam is in Srinagar, which is about 90 km away. Apart from this, Jammu airport is also another option, which is about 263 km away. Srinagar and Jammu airports are connected to almost all major cities in the country. The flight time from Delhi to Srinagar takes around 1.35 minutes, while the flight from Mumbai to Srinagar takes around 3 hours and from Bengaluru, it takes 4.40 hours. From Srinagar, you can go to Pahalgam by taxi or bus.

The mythological belief of Amarnath Yatra

The Kashmir Valley was home to King Daksha and Rishi Kashyap and their sons. According to mythological beliefs, once the valley of Kashmir was submerged and took the form of a big lake. Then sage Kashyap drained this water through many rivers and small water sources.

At that time Bhrigu Rishi also passed through there during his journey to the holy Himalaya mountain. Then when the water level was low, Bhrigu Rishi was the first to see the holy cave of Amarnath and the ice Shivling in the Himalayan mountain ranges.

It is believed that since then this place became the main pilgrimage center for Shiva worship and pilgrimage. The Amarnath cave is considered by the Archaeological Department to be five thousand years old, that is, this cave was there in the Mahabharata period, but it is many thousands of years older than that.

By the way, the journey to Amarnath is being done since the Mahabharata period. Evidence of traveling on this route is also found in the Buddhist period. After this, Amarnath is mentioned in Kalhana’s Rajatarangini Tarang II, written from 1147 to 1149 BC, that King Samdimat of Kashmir was a devotee of Shiva and he used to worship the ice Shivling located in the forests of Pahalgam. This mention shows that how old is the practice of doing this pilgrimage.

Swami Vivekananda had visited the Amarnath cave on 8th August in 1898 and later he mentioned that I thought that the ice lingam is Shiva himself. I have never seen anything so beautiful and so inspiring, nor have I enjoyed any religious place so much.

This place is one of the 51 Shaktipeeths of Mata Sati. It is a religious belief that the throat of Mother Sati fell at this place. A pair of pigeons live in the Amarnath cave. These couples are said to be immortal.

It is believed that any devotee who sees this pair of pigeons. Shiva Parvati herself grants salvation by giving darshan to that devotee. When Mata Parvati asked Lord Shiva why do you wear a shaved garland around your neck, Lord Shiva said that you have worn shaved garland as many times as you have been born.

On this Mata Parvati asked Lord Shiva the reason for being immortal. Due to not knowing the secret of immortality, her birth and death cycle continued while Lord Shiva is immortal, due to this Mother Parvati goes through the cycle of birth and death and receives Lord Shiva as her husband.

Before revealing the secret of immortality to Mata Parvati, Lord Shiva left the Sheshnag around his neck in the Sheshnag lake, the fleas in the flea top, Anantnags into Anantnag, and And left the sandalwood from the forehead in Chandanwadi. In this way, he removed all the living beings from himself and told Mother Parvati the secret of being immortal in that cave.

One day a shepherd named Buta Malik went a long way while grazing sheep. Buta was very humble and kind in nature, he met a monk on the top of the mountain. The monk gave Buta a kangri bigger than coal. When Buta came home and saw that kangri, he found gold in place of coal.

Then he went to thank the monk but he could not find the monk and a cave was seen. When Buta Malik went inside that cave and saw, the white Shivling made of snow was shining. He told this to the villagers and three years after this incident, the first yatra to Amarnath started. Since then this journey has been going on. the descendants of Buta Malik are still looking after this cave and Shivling.

Amarnath Cave is an important pilgrimage center for Hindus. There is a lot of confusion about this. Today, the practice of promoting Baba Amarnath as ‘Barfani Baba’ also continues. Actually, this is the place of Amareshwar Mahadev. In ancient times it was called ‘Amareshwar’.

Local historians believe that the cave was rediscovered in the summer of 1869 and that the first formal pilgrimage to the sacred cave took place 3 years later, in 1872. Malik also accompanied him on this pilgrimage.

In fact, during the medieval period, due to the Turkish and Iranian foreign invasions in the Kashmir valley, there was an atmosphere of unease and fear, so the Hindus fled from there. Pahalgaon was the first target of the foreign Muslim invaders due to the historicity of this town and its fame to Israel. According to Indian belief, a tribe of Jews had settled here for the first time.

There were many Hindu and Buddhist monasteries at this hill station, where people used to meditate. One such investigation has been done that it was in this Pahalgaon were Moses and Jesus spent the last days of their lives. He later was buried in Raujabal near Srinagar.

In such a situation, when the attack took place, the Amarnath Yatra was interrupted for a period of approximately 300 years from the mid-14th century. One of the rulers of Kashmir was ‘Zainulbuddin’ (1420-70 AD), he visited the Amarnath cave. He was then reintroduced in the 18th century. During 1991-95, this visit was postponed for fear of terrorist attacks.

It is also a popular belief that during the Mughal period when Kashmiri pandits were being slaughtered, the pandits prayed in Amarnath. During that time there was an Akashvani there that everyone should go to seek help from the Sikh Guru. It was probably Hargobind Singhji Maharaj. Before that, there was Arjun Devji. From Arjun Devji to Guru Gobind Singhji, all the Gurus had protected India from the Mughal terror.

An English writer “Lawrence” writes in his book ‘Valley of Kashmir‘ that formerly the Kashmiri Brahmins of Mattan used to make pilgrimages to Amarnath. Later, in Batkut, the Maliks assumed this responsibility, as it was their responsibility to maintain the route and act as guides. It was they who used to help the sick, the elderly and made them visit Amarnath, so the Maliks took on the responsibility of conducting the Yatra. They also knew about the weather. Even today, the fourth offering is given to the descendants of this Muslim pastor.