One of the many socio-economic diseases in India is the evil mortgage wages or bonded labor. It has been practiced in our society since very ancient times, unfortunately, it continues in its various forms even today.

What is Bonded Labor in India – How does it work

Under the bonded labor system, a person does not earn a nominal wage or at all in exchange for his work (hard work). Also known as a debtor mortgage. Because bonded labor is generally required as a means of debt repayment.

In fact, this inhumane practice has been used by exploitative homeowners or lenders as a ploy to take advantage of unpaid work.

This system works like this – someone from poor Dalit or weaker section of society will take a loan from moneylenders or landlords for the purpose of earning their livelihood, in return for which they will get the opportunity that whatever the movable or immovable debtor has. The property is to keep it as a mortgage and the debtor has to work as per the debtor’s say without any wages or labor.

These moneylenders keep the loan interest rates so high that the debtor never gets to repay the principal. That creditor will be indebted to him for generations and his debt will never be repaid. In this way, the vicious cycle of bonded labor goes on.

The bonded labor system is one of the main characteristics of the hierarchical feudal society. This system was devised by some powerful sections of society socially and economically capable of exploiting the weaker sections.

Although this practice is not new in India, in many parts of the world, this practice has a different form. This is the worst and most dangerous reduction in colonialism worldwide. One of the worst forms of bonded labor in the entire colonial world was the slave trade system.

Under which the black masters, especially the peoples of African countries, were sold by their European colonial masters to the countries of North and South America, including the West Indies, for plantation and mining work; They used to exploit workers by force and keep them in inhumane conditions.

This business practice has been in vogue for centuries and is now widely used in modern times due to widespread opposition from blacks (for example, the South African people protest led by Nelson Mandela) and the end of the colonial era. There is an improvement somewhere.

One of the main reasons for the practice of the slave trade was that so-called whites considered themselves superior to blacks, called blacks, and did not even consider them human. At that time, European powers used their superior military and economic powers to exploit them by forcing Africans to work as workers for their own benefit.

The bonded wage system in India has its origin in the country’s special socio-economic culture. Like other social ills prevailing in India, bonded labor is also a subtext of our caste system. Mainly, a person belonging to the so-called upper caste like Rajput and Brahmin is exploitative and the lower caste-like Shudra is exploited.

Due to their weak economic and social status in society, SC / STs force Dalits to sell their work to villages for nominal or no salary. This practice has been in fashion since ancient times and still exists in some places.

Furthermore, the lack of more means of subsistence, large families, low educational level, and lack of awareness among Dalits worsen their condition. Sometimes pressure or compulsion from powerful landowners or lenders is the reason for the creation of bonded labor contracts.

Therefore, it is basically a system of exploitation, the roots of which lie in the form of huge inequalities and discrimination in the social, economic, and cultural aspects of India.

Most of the exploitation is effective in agriculture and agriculture and the Dalits are the most exploited due to the caste hierarchy and the absence of an adequate method of agrarian reform. Traditionally, the land is owned by people of the upper caste and people belonging to the lower strata have little or no land for agriculture, so they are forced to work in the fields of others.

Bonded labor has been eradicated due to the implementation of the Land Reform Law in states like Kerala, in contrast to other states like Gujarat, Uttar Pradesh, Bihar, Tamil Nadu, and Karnataka, where families occupied large areas of Earth. Traditionally, zamindari was associated with money loans, so this practice is in vogue here.

Bonded labor is another form of forced labor (beggar, for example) in which a person is forced to sell his work to pay the debt load. However, not all bonded workers are forced labor, but most forced labor is of the bonded labor type, whether under pressure or coercion.

Bonded labor and child labor is not only prevalent in agriculture, but is widely spread in many city areas such as mines, matchboxes, and kilns (where bricks are made), etc. Migrant workers in cities are forced to sell their work for very little, nominal, or no salary.

Constitutional and other provisions of the bonded labor system in India

According to article 23 of the Indian Constitution, trafficking in persons, beggar, or any other form is prohibited and any violation of this provision is a punishable offense under the law for which he will be punished.

The Supreme Court, which issued several decisions, declared bonded wages as forced labor and declared it unconstitutional under article 23.

Therefore, it is one of the fundamental rights conferred by our Constitution and in order to give effect to Article 23, Parliament has enacted the Law on the System of Bonded Labor (Abolition) of 1976. The Law provides for a punishable crime for those who maintain a system of bonded labor.

However, despite the constitutional and legal provisions, the implementation of the law is not satisfactory. The slow implementation and resistance of people from higher social strata do not allow this evil practice to be completely eliminated.

Role of the Supreme Court in the abolition of bonded labor

The inadmissibility or non-application of legal provisions has led to a series of judicial pronouncements by the Supreme Court through public interest litigation (PIL). For example:

Public interest litigation was filed on behalf of an organization working for the elevation of bonded workers in the case of Union of India (1984 SC) v. Kendra Bonded Mukti Morcha; Large numbers of workers in Haryana worked in inhospitable settings in stone mines without medical facilities, safety regulations, and very low wages; 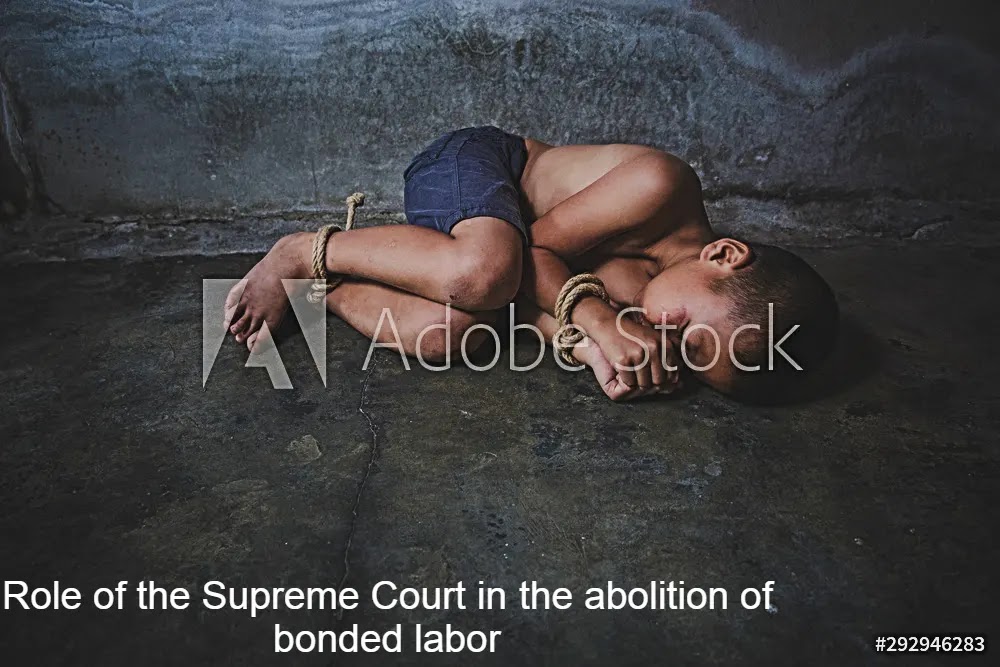 “Guaranteed wages are completely incompatible with the new egalitarian socio-economic society that we have promised to make unauthorized traders not only an insult to basic human dignity but constitute serious and rebellious violations of constitutional values.”

At the time of the rehabilitation, the Supreme Court had said in the case Neerja Choudhary v. Madhya Pradesh (AIR 1984 SC) state that bonded workers must be identified and released and their rehabilitation organized along with their release. Arrangements must be made

In 1997, the Court asked the National Human Rights Commission (CNDH) to supervise the implementation of the Court’s instructions regarding the rehabilitation of bonded workers and the provisions of the Law on the System of Bonded Labor ( Abolition) of 1976. Thus, the Supreme Court played an active role in the fight against this evil.

Therefore, various non-governmental efforts and the awareness of the Supreme Court have played an important role in reducing the rate of labor bondage. But it has not been completely eradicated from society, which is very unfortunate for any country, especially for a country like India, which wants to become the world leader of the 21st century.

We see young people and children around us working with low wages or wages in very poor conditions, they are forced to work in various occupations during the 12-14 hour work period. Furthermore, the mental attitude of the so-called upper castes or people from higher economic strata has not completely changed; News reports have confirmed that domestic servants are treated like animals even today with a variety of cruelty, including sexual exploitation.

They are provided with little food to eat, very dirty places to sleep, and low wages. Such incidents cannot be prevented only with the efforts of NGOs or the Supreme Court or government officials; Only people have to change their mindset.

Therefore, it is important that we, as a society, have to change our attitudes and attitudes towards the poor and weak sectors and try to restore the values ​​of human dignity, which is part of the right to life.

2 thoughts on “What is Bonded Labor: How it works?”