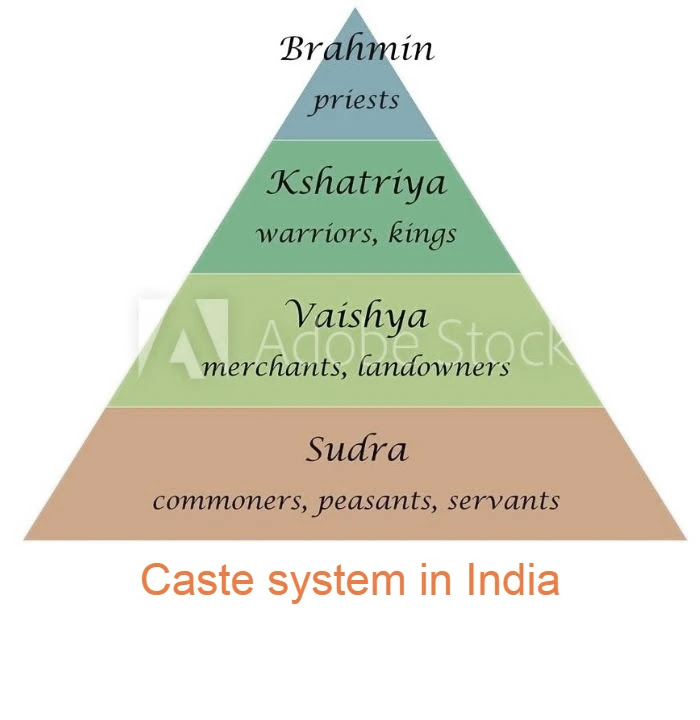 As such, a person’s social status is defined on the basis of their caste in which they are born. In other words, on the basis of caste, at the moment of the person’s birth, it is decided that they belong to the upper or lower level of society.

It is a shame that even in the 21st century and in this time when human society has progressed scientifically so much that people are planning to buy land even on Mars, Indian society still considers the ancient system like a caste system.

Here many social movements and notable social reformers dedicated their entire lives to eradicating discrimination based on this one birth. However, this has not happened on the ground.

The Constitution of India also made many provisions to guarantee the rights of socially backward people and there are laws in this context, but there should be more in this context.

In this article, we will try to understand and know various aspects of the caste system in India, such as caste meaning, varna system, its harmful effects, constitutional protection mechanism, and current details.

The caste system, also known as varna and jati, which can be understood as identification based on birth. This is the title that is given to anyone without asking. This is a legacy system;

Thus, a child assumes the caste of his father at birth. According to Hindu scriptures, there are mainly four types of Varnas that divide Hindu society into Brahmins, Kshatriyas, Vaishyas, and Shudras.

What is (casteism) caste system?

The caste system or Varna is a purely Indian fact and the practice is practiced especially by Hindus, for a period of time, even since it is considered India, to cling to other religions such as Islam, Sikh, Christian, etc.

As already explained, it is very similar to the caste concept of the West, it can also be compared with the class system of the European islands. The class system is also like the discrimination system.

The class system is also based on many different facts, such as wealth, power, prestige, a lineage of birth, and occupation. Generally, the class is not inherited, while the caste is. But like the caste system, the class system also has differences in social groups based on their level in society.

A varna system is a unique form of the class system in which the order of society is determined on the basis of birth. This type of system exists only in the Indian subcontinent.

Like the class system, the varna system does not allow any person to pass from one caste to another. People of different castes have strong restrictions on eating and marrying each other.

An important characteristic of the caste system in India is homogeneity such as: marrying within one’s caste. This is a very general, firm, and very well defined system.

That is why varna or caste are considered very close in class. It is a very narrow arrangement of satisfaction in which almost all children would end up in the same sector of society to which their father belonged.

Origin of the caste system in India

But in general, people’s occupations became inheritance and the caste system in India also changed from occupation to birth and then inheritance. Now a person’s caste acquires a more stable social status based on their birth.

Regarding the origin of the caste, according to the Rigveda, the doctrine of religion is explained, which is one of the most sacred texts of the Hindus.

Some theories also believe that the initial man was none other than Lord Brahma himself. Therefore, according to him, various varna originated from Lord Brahma.

Caste classification in the caste system

Classes are classified according to their occupations. Due to wealth, power, and privilege, the two upper-class Brahmins and Kshatriyas began to use other religions to fully secure their status and establish the monopoly. History also tells us that only two upper castes dominated the supreme position in society.

Even the circumstances remain similar. These two higher categories are considered far superior to the lower caste. The acceptance or legitimacy of this superiority was conferred by various religious writings, so no one questions it. These people want to stabilize their positions of power, power, and Orthodox traditions.

Even if it is considered from the initialization of society, the Brahmins, usually priests or scholars, are at the top. The second class includes the Kshatriyas, the rulers, and the soldiers. Generally, the Kshatriyas were associated with the Brahmins because they used to run their rule through them. A Kshatriya is a symbol of physical and mental strength.

The next Vaishya or merchant class according to heritage. It was the duty of the Vaishyas to ensure the prosperity of the community through agriculture, animal husbandry, trade, and industry. The Vaishyas were considered comparatively weak. And they were exploited by the rulers. The luxurious lifestyle and war, etc. of the ruling class were determined on the basis of the prices of the Vaishyas.

After this came the Shudras, the lowest level among the four varnas. They used to be day laborers, poor farmers, and servants. The Shudras were believed to have no special abilities and were only eligible to serve as slaves of the three upper classes.

The Shudras were not allowed any rights and privileges and were not allowed to perform any kind of religious or havan activity, recite or recite the Vedas or recite mantras. Even they were not free to enter the temple and follow religious traditions.
This discrimination is practiced even today with the so-called Shudras on a very large scale in our society.

Apart from these four varnas, another class that was considered below everything was ‘untouchable’, the outer caste, because they were not considered part of that varna. These untouchables had to do some tasks that were dirty and contaminated, such as Cleaning toilets.

This is the most discriminatory and exploitative work, the four characters stay away from them. And if the shadow of these untouchable castes falls on someone, then it is considered a sin.

First, in the Preamble to the Constitution, India believes that India is a nation where there is socio-economic justice; Where there is equality of opportunity and level and where personal dignity is assured.

The Constitution guarantees equality (article 14); In addition, the states ensure that there is no discrimination against anyone on the basis of caste (Article 15 (1)).

Untouchability has been eradicated and its use in any form is prohibited in practice (Article 17). The Constitution provides that no citizen should be subject to any disqualification or prohibition on the grounds of caste or religion alone (Article 15 (2)).

It also grants powers to the states to make reservations in educational institutions (articles 15 (4) and (5)); And A.C. In appointments in favor of (articles 16 (4), 16 (4A), 16 (4B) and article (335). Article 330 also provides for the Lok Sabha for cataloged castes, state legislative assemblies under article 332, and the items 243D and 340T Seats in local cars are provided by reservation.

Apart from this, the constitution guarantees protection against all forms of social injustice and exploitation (article 46).

Parliament passed many more articles to comply with the guidelines of the Constitution and stop the system of exploitation and discrimination against the so-called lower castes. Some of them are the following:

This is the second social welfare legalization aimed at providing protection to manual workers or the Valmiki caste or dissenters from a great deal of socio-cultural and economic discrimination in the social system.

The caste system in India is so deeply ingrained in socio-economic and religious life that it includes a God-given certificate behind it. And any action against or against this system is considered a sin or an insult to God.

But it’s not really a God-given quality to be emulated. It has had a highly exploitative and discriminatory effect on our social system for centuries. The caste system as a by-product has given rise to many other evils like untouchability or untouchability in society.

This system still continues as a well established and pious customary rule and is being applied by almost everyone, regardless of their economic and social status. Although the younger generation has abandoned such social norms, it is still well established in our social and religious beliefs. If India has failed to eradicate this caste-based discrimination, then even in the 21st century, India has not become a fully modern country.

The biggest problem in eradicating and eliminating this evil from society is widespread social acceptance. And until there are changes, there is no hope. Because the law can only provide protection against exploitation, but it cannot change the behavior of the so-called upper castes. It is only from the young and modern generation that there is hope for change so that they can truly bring social justice to our country.