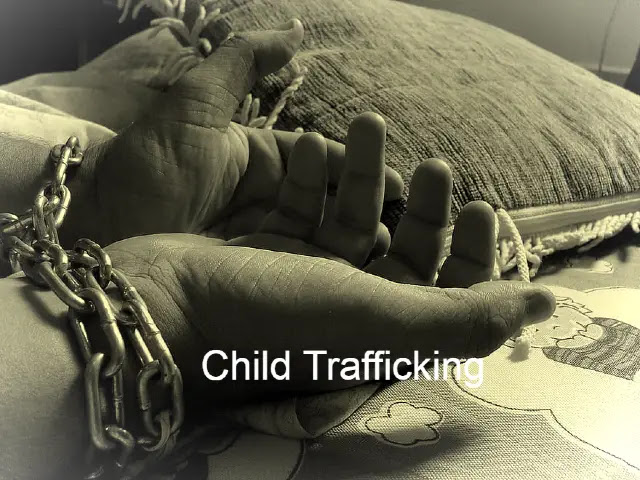 Child trafficking is one of the serious problems that the whole world is fighting for. Then, as responsible global citizens, we have been using the power of language or words to influence the world and we are demanding strong law from the government.

Socio-economic are some of the reasons which play an important role in the trafficking in India.

Due to poverty, illiteracy, lack of employment and lack of security for the future, etc., children are often expelled from the four protective walls of their homes.

Many times their parents send them and eventually they are caught in the trap of the traffickers.
Human trafficking has been attributed to factors such as social inequality, regional gender preference, imbalance and corruption; Many cases of recruitment of women and children have also been reported, especially in tribal areas of India.

Child trafficking has become such a profitable business that even the gangster groups involved in this crime have developed an underworld commercial structure for it. These gangs, after finding the right opportunity in the lack of security and negligence in law and order, make the children disappear.

Addressing the Fourth Ministerial Meeting (2016) of the South Asia Initiative to End Violence against Children, he said that it is everyone’s responsibility to protect children. Therefore, all potential parties, such as parents, teachers, children and communities, must work together to eliminate child trafficking.

Under India’s Immoral Trafficking Prevention Act, commercial sexual exploitation is punishable by imprisonment from seven years to life in prison. In India, the Abolition of Bonded Labor Act, the Child Labor Act and the Juvenile Justice Act prohibit bonded and forced labor.

But these laws are insufficient to curb human trafficking, which is why the Union Ministry of Women and Child Development (WCD) has formulated a new law to curb the growing incidence of human trafficking.

It should be noted that the Supreme Court has taken a tough stance on child trafficking. She has repeatedly reminded the central and state governments of their duty.

In 2014, the Supreme Court returned the reports from the Chhattisgarh and Bihar governments and sought an answer as to why they did not follow the guidelines given in 2013 regarding missing children.
It should be noted that missing child cases are increasing rapidly in these two states. The Supreme Court said that instead of mechanically recording a response, some concrete steps should be taken.

The court, expressing its displeasure, also clarified that the central and state governments must ensure that if children are missing, they must hold the DGP and the Secretary General of State responsible and seek their response.

The Supreme Court had ordered that a special juvenile police unit be established in the state, with the FIR’s registry in relation to missing children. The court also ordered that at least one officer be stationed at the police station to ensure that it functions as a special unit for minors.

He urged the National Human Rights Commission to see what actions are being taken in this regard.

However, the police administration seems to lose the sensitivity of the court, which is evidenced by the fact that even after repeated warnings, the numbers of missing children are increasing. According to data presented in Parliament in July 2014, 3.25 lakh children disappeared between 2011 and June 2014 in the country.

The NGO in its book ‘Missing Children of India’ claims that it has obtained this data from government agencies by submitting RTI in 392 districts, these figures are recorded. Then there are thousands of children, whose parents abandon them due to their adverse circumstances, in such a situation it is not possible to obtain their disappearance report.

Despite this dire situation, a high-ranking Delhi Police officer sent a circular in reference to the children, stating that the deadline for the final complaint in cases of missing or abducted could be one year instead of three years. .

It is clear that in the past, after the disappearance or kidnapping of a child, his case was recorded in police records for at least three years. The Delhi Commission for the Protection of Children’s Rights filed an objection to this circular, stating that the police cannot issue such arbitrary orders to reduce the number of unsolved cases, as the possibility of children falling into the clutches of gangs involved in sexual exploitation is higher. is.

In such cases, the investigation would be incomplete if the police closed the file. Following the objection of this commission, the Delhi Police canceled its circular.
In the context of police negligence towards missing children, the Supreme Court made it clear in February 2013 that all missing child cases would be recorded as recognizable crimes after proper investigation.

In all pending cases where the child is still missing, but no FIR has been submitted, the police will have to submit their report within a month. In all cases of missing children, the child will be presumed to have been abducted or become a victim of trafficking.

It is well known that management is insensitive and dysfunctional in cases involving children. Had the Delhi High Court ordered the Delhi police to find out if such incidents were due to organized crime?

The absence of children on such a large scale makes it clear that traffickers may be involved. It has been observed that on the most worrying issue of missing children, the police claim that children

The Government has introduced the 2017 Human Trafficking (Prevention, Protection and Rehabilitation) Bill with strict provisions to punish those involved in “increasing forms of trafficking”.

The new bill stipulates the provision of special courts to double the punishment of human trafficking offenders and for a speedy trial of such cases.

This carries life imprisonment and severe punishment for taking away their property. Importantly, the entire burden of proof rests with the traffickers.

Bilateral agreements have also been concluded with Bangladesh and the United Arab Emirates to curb human trafficking with the drug and arms trade from the borders of neighboring countries.

Not only this, India has also ratified the SAARC (United Nations) Convention for the Prevention of Trafficking in Persons (SAARC) and the United Nations Convention, which is considered the third largest organized crime in the world, with the provision of various protocols for trafficking in human beings, In particular, women and children have been given to prevent trafficking.

To prevent the disappearance of children, a national network is necessary that not only seriously records the details of their disappearance, but also takes corrective measures for their return.

Significantly, after the Nithari scandal, the National Human Rights Commission formed a committee headed by PC Sharma. If the committee’s recommendations had been taken seriously, the situation for children in the country would not have been so pathetic.

The committee had made the pertinent suggestion that the National Criminal Records Bureau (NCRB) should establish a national identification system to prevent this disappearance of children.

In relation to the growing graph of human trafficking in the country, the Interior Ministry argues that the central government should issue comprehensive warnings from time to time to improve the efficiency of states in addressing the crime of human trafficking and take action against crimes in accordance with the law. To do this, funds must also be released for the establishment of human trafficking units in the centers and various districts of the states.

According to the ministry, it is a state issue due to the police and citizens, state governments are responsible for reducing and tackling crimes of human trafficking or smuggling. However, a nodal cell has been created in the Interior Ministry against illegal trafficking in persons.

In India, organ trafficking, child prostitution and begging by children are included in the category of crime, but in the absence of coordination and cooperation between the legal surveillance system and the various departments concerned, the figures Trafficking in children continues to increase rapidly. Has been.

The number of missing children in the country cannot be reduced until law enforcement agencies prioritize issues related to this issue. One of the main drawbacks of law enforcement is that data and information on human trafficking and exploitation are not carefully stored.

The increasing incidence of missing children is not only a failure of the police and administration, but also a cause of endless pain for parents. Therefore, it has become necessary to search for new dimensions that may be useful to find missing children. The use of the media can play an important role in this direction. It is important that the protection of children and their rights is given the highest priority.