We are proud to be 21st century Indians who rejoice when a son is born and if a daughter is born, they remain calm when no rules have been made to celebrate it. There is so much love for the boy that, in wishing for the birth of boys, we are killing girls before birth or at birth, if fortunately they are not killed, we would find many ways to discriminate against them throughout life. It is called gender inequality.

Although our religious views consider a woman as a goddess, we refuse to recognize her as a human being. We believe in goddesses, but we exploit girls. When our opinions about women emerge, we are a secondary society where our thoughts and teachings are different from our actions. Let us try to understand the discrimination of gender inequality in India and find some solutions.

What is gender inequality? | its definition

‘Gender’ is a cultural term that defines the roles and behaviors of ‘men’ and ‘women’ in society in relation to social definition, while the term ‘sex’ defines ‘men’ and ‘women’ as a biological And physical phenomenon. In social, historical, and cultural aspects of gender, gender is a work of power between men and women.

Where men consider themselves superior to women. In this way, “gender” should be understood as a man-made principle, while “sex” is a natural or biological characteristic of human beings. Sexual inequality can be broadly defined as gender-based discrimination against women.

Traditionally, women are considered to be a weaker caste class in society. She is in a subordinate position of men. It is exploited, humiliated, disorderly, and discriminated against both at home and in society. This strange type of discrimination against women is prevalent in all parts of the world and is very important in Indian society. 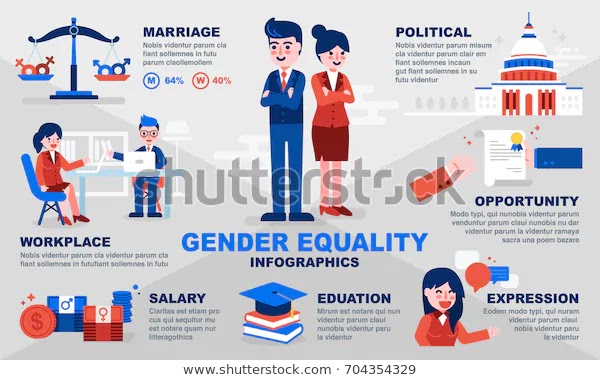 Types and causes of gender inequality in India

The root cause of gender inequality in Indian society lies in its patriarchal system. According to the famous sociologist Sylvia Walbe, “patriarchalism in the process and the system of social structure in which men dominate, oppress and exploit women.”

The exploitation of women is a centennial cultural phenomenon in Indian society. The patriarchal system has earned its legitimacy and acceptance of our religious beliefs, be it Hindu, Muslim, or any other religion.

For example, according to ‘Manu’, the creator of the ancient Indian Hindu law, “it is believed that a woman should be under her father during her childhood, under her husband after marriage and under her son after old age or widow.” You are not allowed to remain independent under any circumstances. “

The situation described above for women by Manu is also valid in the structure of modern society today. Yes, with some exceptions here and there, women have no power to freely decide at home or outside of society or in the world.

Muslims also have the same status and there also the penalty for discrimination or subordination is provided by religious texts and Islamic traditions. Similarly, in other religious beliefs, women are being discriminated in the same way or in different ways.

Women are also unfortunate about gender inequality in our society, due to prevailing sociocultural conditions, they have accepted their status as men and are also part of this same patriarchal system.

Women not only receive unequal wages or overworked jobs but are also offered low-skilled jobs with very low pay scales. It has become a major form of gender inequality.

Educating the girl from childhood is still considered a bad investment because one day she will get married and will have to leave her father’s house and go to another house. Therefore, due to a lack of good education, jobs currently cannot meet the conditions of skill demand,

At the same time, every year in high school and middle school, girls perform better than boys. This shows that parents don’t spend much on girls’ education after the tenth standard, so they are falling behind in the field of getting a job.

Not only in the field of education but also in terms of family and eating habits, it would be only the boy who gets all kinds of nutritious and delicious foods while the girl eats everything the men in the family eat. After eating, they save, which is far inferior in quality and nutrition in both ways, and this is the main reason for their poor health in recent years.

Anemia (Arakta), a disease caused by anemia due to lack of blood in women, and poor diet at birth are inferior types of food found both at home and by their father’s in-laws, and at work hostile. The burden he has been carrying since childhood.

Therefore, based on the previous discussion, it can be said that inequality and discrimination with women are treated at different levels in society, at home, and outside the home.

The state of India under all these indicators is as follows:

Both global indices reflect India’s position in the field of gender equality. India’s work in the field of political empowerment is commendable, but its position on other indicators is very regrettable and much effort is needed to improve this situation.

Gender inequality manifests itself in many ways and the signs of most concerns in India are as follows:

These are some of the most important indices mentioned above that reflect the situation of women in the country.

The murders of women and the murder of children are the most inhumane acts and it is very shameful that all these practices are widespread in India.

These statistics show that despite laws, i.e. the Antenatal Diagnostic Techniques (Regulation and Prevention of Misuse) Act of 1994, abortions are still at a high level after gender testing. Data from an investigation by McPherson shows that around 100,000 illegal abortions in India are performed each year simply because the fetus in the womb is the girl’s fetus.

Because of this, an alarming trend was reported during the 2011 census that the child-sex ratio (sex ratio of children in the age group of 0 to 6 years) is 919, which was 8 points less than the previous census 2001. These statistics show that the number of abortions has increased after gender testing.

As far as the sex ratio is concerned, it was 943 during the 2011 census, which increased by 10 points compared to 933 in 2001. Although these are a good sign that there has been an increase in the sex ratio in your All in all, they are not yet completely in favor of women.

As of 2011, female literacy is 65% compared to 82% for male literacy. These ranges reflect the wide disparity with women in India and also indicate that Indians are not paying much attention to women’s education.

All of these indicators reflect India’s unwavering position on gender equality and the fundamental rights of women. Therefore, each year the Indian government implements various schemes and programs for the empowerment of women in order for women to obtain their benefits, but the reality is that, even after the implementation of such programs, there is no significant change in the situation of women.

These changes will only be seen when the ideas and stereotypes that are already on the minds of people in social change when society itself makes no difference between boys and girls and girls feel no burden.

The Indian Constitution has taken several positive steps to eliminate gender inequality; The preamble to the Constitution refers to the objective of achieving social, economic and political justice for all, as well as providing a level of equality and opportunities for all its citizens. In this sequence, women also have the right to vote.

Article 15 of the constitution also prohibits all discrimination based on separation by gender, religion, caste, and place of birth. Article 15 (3) empowers any state to make special provisions for women and children. In addition, the Guiding Principles of State Policy also provide a series of provisions that help protect women from protection and discrimination.

In addition to these constitutional guarantees, Parliament has also enacted a number of protective laws to end the exploitation of women and grant them equal status in society. For example, with the abolition of the practice of Sati under the Sati Practices Abolition Act of 1987, this act became a punishable offense.

The Dowry Prohibition Act of 1961, to end the practice of dowry; The Special Marriage Act, 1954, to grant the correct status to marriages of married or married couples; Draft law on prenatal diagnostic techniques (introduced in Parliament in 1991 to prevent female feticide and many more similar acts, passed in 1994).

In addition to this, Parliament periodically carries out many reforms taking into account the safety of women in the rules applicable to the changing circumstances of society, for example, Section 304-B ​​of the 1860 Indian Penal Code. measures to punish the life of imprisonment by burning the bride’s death in the case of dowry or the lesser crime of killing the burned bride.

Many constitutional safeguards have been put in place for women in India, but the basic reality is very different. Despite all these provisions, women are still considered second class citizens in the country, men consider them as a means of fulfilling their sexual desires, atrocities with women are at their alarming level, the dowry practice today. Also, female feticide is a norm in our homes.

Why Child Labor is done by children: the reason and solution

How can we end gender inequality?

Along with the constitutional list, all kinds of discrimination or inequality will continue, but real change is possible only when the thinking of men in India is changed. When this thinking changes, a type of humanity begins to treat men equally with women instead of treating them as their subordinates.

Even not only men but women also have to change their old orthodox thinking according to the culture of the world and know that they too have become part of this exploitative patriarchal system and help men to dominate themselves.

Therefore, there is a need to empower women, where women can be financially independent and self-sufficient, where they can go fearlessly in the world fighting against their fears,

Where you can get your rights out of men’s pockets and for this you don’t even need to ask anyone, where you can get a good education and become a good owner of your property and most of all her. From Manu, you get the freedom to make decisions and make your own decisions.

We can only hope that our participatory democracy can find a solution to India’s problem of gender inequality in the times to come, and through the collective efforts of men and women and the reality of the thinking and action of all of us, dreams come true can.