According to a report by the United Nations Education, Science, and Cultural Organization (UNESCO), India has the highest number of illiterate adults at 28.7 million. These statistics point to the staggering inequality in education in the country. 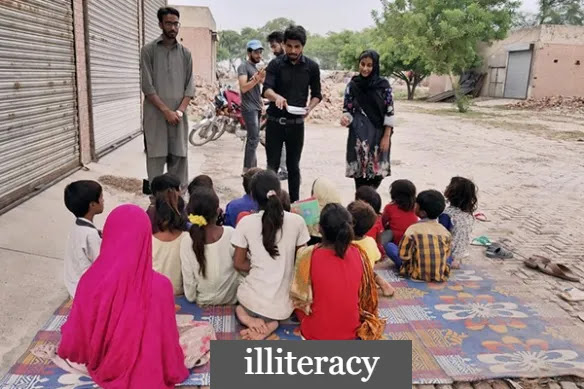 The level of illiteracy has increased by 63% from 1991 to 2006. There is a high literacy requirement for any nation to be at par with other countries on a global scale. No country is considered a promising nation with a stable economic rate but a low literacy rate. After all, education is a fundamental right guaranteed to the citizens.

Further, it needs to be highlighted that India is a country where inequality is to such an extent that one state has achieved more than 90% literacy rate and on the other hand, there are states where the literacy rate is still disappointing.

Literacy can be defined as the ability to learn and read. It is an emerging concept that emphasizes not only the ability to understand the printed text well but also the visual institutions and technical awareness. It is a multidimensional concept that keeps on adding new parameters to it in the context of development in the global world.

According to UNESCO, “Literacy is the ability to recognize, interpret, understand, construct, communicate and calculate using printed and written material associated with different contexts. Literacy includes the continuity of learning for an empowered individual to develop his knowledge and potential to achieve his objectives and to participate fully in his community and outside society.

Causes of illiteracy in India

Then it is not a new concept that the rich have better educational facilities than the poor. Poor people, due to lack of skill and knowledge, involve themselves in the work of unskilled laborers to feed their families. In this way, their attention becomes focused on earning income from the place of getting an education so that they can be able to survive in society.

One of the main reasons for the dismal literacy rate is inadequate school facilities. The teaching staff working in government schools is incompetent and unfit.

Another reason that motivates children to drop out of school is the lack of proper sanitation. A study has clarified that 59% of schools do not have drinking water facilities. There is also a shortage of teachers.

Efforts to improve the literacy level

In 1993, the Supreme Court, in one of its orders, held that children have a fundamental right to free education and thus were included in the Constitution in 2003 under the Right to Education (83rd Constitutional Amendment, 2000).

Despite this, the country could not provide free and compulsory education for children in the age group of 10-14 years even after the 45th Article of the Constitution came into force.

Many other schemes were also implemented to ensure the right to education in the country. The National Plan of Education was declared in 1986 to be committed to removing the problem of illiteracy throughout the country, especially among the young population.

Then in 1988, efforts were made to build a literate community through the National Literacy Mission. Its aim was to achieve literacy of 41% by the year 2035. The Education Policy of 1992 guaranteed free and compulsory education to all children up to the age of 14 before the advent of the 21st century, a policy that did not prevent and prevent prevalent illiteracy and schooling. Is.

“Sarva Shiksha Abhiyan” was launched in 2001 to ensure that all children in the age group of 6 to 14 years go to school and complete eight years in school by 2010. The most important element of this scheme is the Education Guarantee Scheme and Alternative and Innovative Education, which means the construction of primary schools mainly for children within a radius of one kilometer.

The “Sarva Shiksha Abhiyan” mainly involved decentralization for the planning and management of primary education, which lacked the participation of local communities and thus failed to generate consensus on many policies.

Furthermore, corruption is an uncorrectable element in the allocation of government funds for education. Out of the actual allocated budget for education, very little money is used in the implementation of the schemes.

A major factor in ruining the state of education is the commercialization of education both at the primary and higher education levels. Private schools charge very heavy fees which makes it difficult for poor mothers to send their children to school.

Through the Mid-Day Meal Scheme, it was started to provide nutritious food to the children with the aim of making them better for studies. Instead, under this scheme, the future of children is being tarnished with flies and lizards in the food.

A series of RTIs filed by journalist Siddheshwar Shukla revealed that during the last three years, a large number of mid-day meals served to 11.5 lakh children in Delhi have failed the test conducted by the government.

Not only the government but every educated person needs to accept the eradication of illiteracy as an individual goal. Every effort made by all educated persons can contribute to eradicating this menace. Shiksha Bharat is also an initiative that aims at providing a platform for educated Indians to provide assistance in the field of basic education to common children.

In the words of Barack Obama, “We will wait for some other person or time until change comes. We are one of those who have been waiting till now. We are the change that we seek.”