Poverty is a widespread situation in India. Since independence, the spread of poverty has been a cause for concern. We are in the 21st century and poverty remains a growing threat even today. More than 29.8% of the 1.4 billion inhabitants are still below the poverty line.

It is worth noting that poverty levels have declined in recent decades, but efforts to completely blur the line between rich and poor must be strictly followed. The health of a nation, in addition to national income and GDP, is also determined by the standard of living of its people. Thus, poverty becomes a stain on the development of any nation. 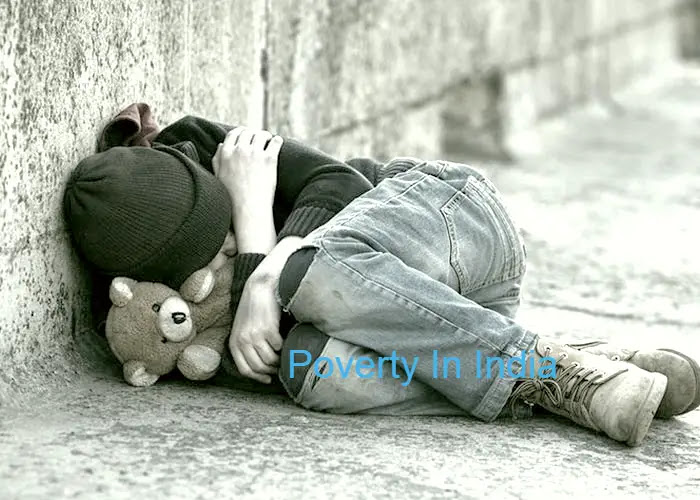 Poverty can be defined as a situation in which a person cannot meet the basic necessities necessary for life.

These basic requirements include food, clothing, and accommodation. Poverty is a condition that does not meet the civilized standards necessary for people to live. Poverty is a vicious cycle that usually encompasses all members of the family.

The person eventually dies due to extreme poverty. Poverty in India can be defined taking into account the dimensions and characteristics of the economy, the semi-economy, which have been determined by international conventions.

India decides poverty levels based on both consumption and income. Consumption is measured by the part of the currency that people spend on the purchase of household essentials and income is calculated according to the income earned by private individuals.

Another concept that should be mentioned here is the concept of the poverty line. This poverty line serves as a standard for measuring poverty in India and other nations.

The poverty line can be defined as an estimate of the minimum level of income, which is necessary to satisfy the basic needs necessary for the survival of a family. In 2014, in India, the poverty line was set at Rs 32 per day in rural areas and Rs 47 per day in towns and cities.

Causes of poverty in India

According to the international economist Regner Nerks, “a country is poor because it is poor.” This statement points to the unfortunate reality that poverty is a vicious cycle. In this cycle, the level of savings is low, which reduces the investment area, so again, income is low and this cycle continues like this.

Another important reason for the existence of poverty in India is the climatic conditions of the country. Unfavorable climate reduces people’s ability to work in companies. Floods, famines, earthquakes, and cyclones interrupt production. The population is also another factor that contributes to this evil. Population growth reduces per capita income.

In this way, the larger the family size, the lower the per capita income. The unequal distribution of land and property is another problem that prevents the equitable concentration of land in the hands of farmers.

Effects of poverty in India

It’s worth noting that while there are some clear signs of progress in the economy over the past two decades, these advances are uneven in many areas and places. Delhi and Gujarat have higher growth rates than Bihar and Uttar Pradesh.

About half of the population lacks adequate accommodation to live in, adequate and decent sanitation system, nearby water sources in the villages, and a lack of secondary schools and adequate roads in the villages. Even some sectors of society such as Dalits are not included in the poor list by concerned government-appointed officials. These are groups that are not considered suitable in society.

The government’s efforts to reduce poverty in India cannot be ignored while talking about poverty. First of all, it is necessary to mention that the changes that have been observed in the form of marginal dots in proportion to poverty are due to the creation of government initiatives aimed at raising all people above the poverty level.

However, more efforts are needed to remove it now because corruption is linked to it.

PDS (Public Distribution System): The PDS includes food and non-food items provided by the government to the poor. The main foods to be distributed are wheat, rice, sugar, and kerosene, which are distributed to the public distribution system through designated stores in every state in the country.

However, the food grains provided by the PDS are not sufficient to meet the consumption needs of a family. Under the PDS scheme, each family living below the poverty line receives 35 kg each month. 15 kg of food grains will be provided monthly to rice and wheat families and above the poverty line.

Even after being such an important scheme, this plan is not perfect. The leakage and diversion of food grains through PDS are very high. Only 41% of wheat is delivered by the government to the poor. Another option against PDS has been the suggestion of some food-supported cash transfers, but this does not satisfy the need for an intercepted grocery store.

MGNREGA (Mahatma Gandhi National Rural Employment Guarantee Scheme): This scheme aims to bring security to their lives by providing at least 100 days of employment to people in rural areas. The generation of employment has been greater with this law compared to other schemes.

RSBY (Rashtriya Swasthya Bima Yojana): It is insurance for the health of the poor. Provides free facilities in public and private hospitals. All families below the poverty line get a yellow ration card by paying a registration fee of Rs 30, which includes a biometric-capable smart card with their fingerprints and photos.

The implementation of most schemes is fraught with challenges. The programs are linked to the leakage of subsidies that impact the poor. These programs must be centralized in an organization to avoid leakage at multiple levels.