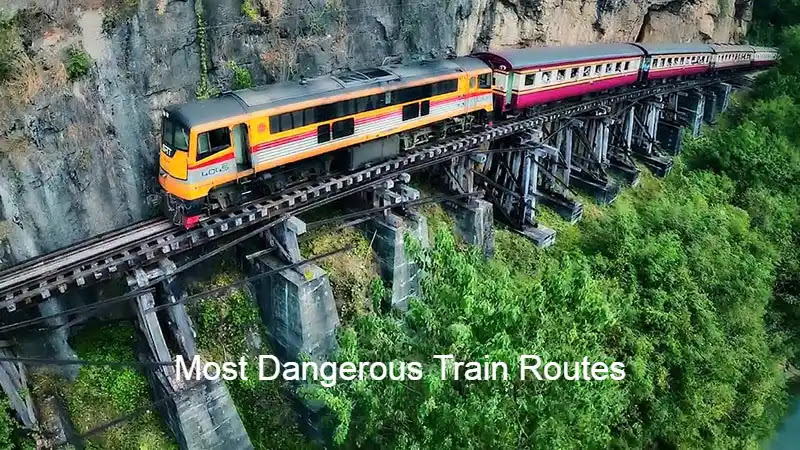 Human beings have spread the network of railways to every corner of the world, that is why today people can go to any corner of the earth, but some such rail routes have also been constructed where people do not consider it empty of danger. It is said that traveling these routes is no less than a roller coaster ride.

Let us tell you about 5 most dangerous train routes in the world where your heart should be of stone to go. These difficult railroads also have a railway track that killed more than one lakh people. Let’s know about those routes.

To travel on this railway route you must have Big liver because going on the Pilatus railway is not a child’s play.

Pilatus, Switzerland, has a railway route where weak-hearted people should stay away from travel.

The Pilatus Railway Route is part of the Mountain Railway and is the world’s largest climb on the railway route.

This train route at an altitude of 2000 meters passes through many dangerous slopes. Its length is 4.5 kilometers and this train connects the Alpnach State to Mount Pilatus.

During this journey, the train has to go through a steep climb of 1600 meters and this is why people find this route quite risky. Onboard a train passing through this route, 32 passengers can ride together and can become a part of this thrilling journey.

Often this route is open from May to November and after that, in winter the train is pulled on this route with the help of a car. It may sound fun to listen to, but during the journey, the sweat of the good is left. The train running on this route is run from Pilates railway border.

The proposal to construct such a dangerous Train tracks was first proposed in 1873 and in 1889, work on the project started. In those days the train running on this route was run with the help of steam which was changed to electronic with changing times.

Even today, on the old tracks of this route, the train runs at a speed of 9 kilometers per hour. These hundred years old tracks are still working as they are today. However, some changes have been made over time to the coaches of the railways passing through this route.

The Maeklong Railway Route is a railway track present in Thailand. This route leading to Long Bean Bridge passes through the narrow streets of the city. These streets have shops and houses with railway tracks in between. This causes the train to pass through the track several times a day. Maeklong is a Thai word meaning Umbrella Pull, Down Market

You might be surprised, but in this market, people sit on the tracks by shops and sell goods. As soon as the train arrives, everyone collects his luggage. After the train passes, this market is restored. This happens several times a day.

The merchants here sell vegetables, fish eggs, and all the necessary goods on railway tracks. Explain that Thailand’s largest seafood market is located on this railway track. Many people travel in the train passing through here so that they can enjoy traveling through the filled market.

The Siam-Burma railway route present in Thailand is known as the Death Railway.

This 415 km long railway line connects Thailand with Burma. The Death Railway in Thailand is even more special than the rest of the railway track because its history is quite terrible.

Actually, more than 90 thousand people died while falling in the river while making this railway track. At the same time, prisoners of war were also forced to work for the construction of the track, due to which 12 thousand prisoners were killed. The Railway line was discontinued in 1947 but reopened 10 years later.

The first thing people come to see in Thailand is that the Death Railway is very popular among the railway track tourists.

The beauty of this route originating from the tunnel in the hilly areas is made. Actually, this track is made at a very high height with the help of a 65-meter high pillar. The special thing is that the train passing through this route enters the tunnel directly after the Bridge. Its height is about 9200 meters above sea level.

The journey of this track in the middle of mountain dense forest and river-like environment seems scary while people sitting inside the train feel as if the train is moving in the sky. This route becomes the first choice of nature lovers after snowfalls in winter.

The special thing is that this railway track passes through the main runway of Gisborne Airport where it is quite a shocking sight for the people traveling this railway track. At the same time, there are some people who see the journey of this track as an adventure. Construction of this railway line started in 1872 and it took a long time to get it ready.

This railway track is located between Napier to Palmerston. Before passing through this runway, trains have to get permission from the Air Traffic Control Room, so that both the movement of the aircraft and the railway can run regularly and no incidents of any kind occur.

So guys, what do you think about the 5 most dangerous railway tracks in the world? If you liked this, please share the article. Also, subscribe to the blog.

1 thought on “5 Most Dangerous Train Routes in the World”