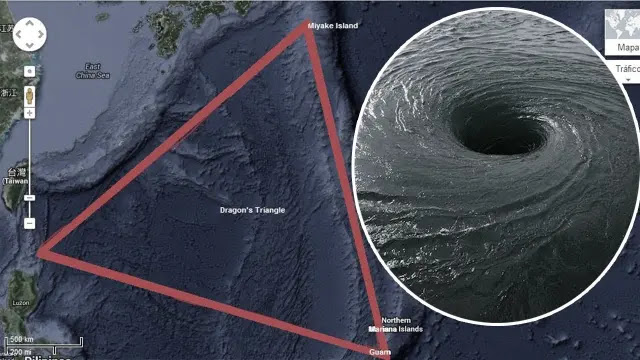 It is a matter of mystery, and how the Bermuda Triangle cannot be named. There are many mysterious places around the world, both on land and in water. The Bermuda Triangle has held the first place in the list of mystical places for many decades. It is a place where both people and ships mysteriously disappear.

But there are many other places on the earth that often do not go unnoticed. One such place exists in the Pacific Ocean, from where the news of the strange disappearance of people keeps coming up. We are talking about the Devil’s Sea, also known as Dragon’s Triangle.

This place is like a nightmare for sailors all over the world. The Devil Sea is one of 12 Vile vortices located around the Earth in the Pacific Ocean near the Japanese coast. 12 Vile Vortices are those areas where the influence of electromagnetic waves is more than the rest of the planet.

The Dragon’s Triangle or Devil Sea is the area between the Japanese island of Bonin and the Philippine Sea. Geographically, the area is located around Miyake, a Japanese island about 100 kilometers south of Tokyo, but the exact location of the Devils Sea is still in dispute today Because many reports about this area claim different distances.

The mystery about this area is that many ships and people disappeared from here and no one could find them. The vanishing of people and ships begins the journey. Since 4 January 1995, when the Japanese ship “Shinano Maru No.10 sea” suddenly lost radio contact near Kirishima on the volcanic island.

After the disappearance of the ship, Japanese newspapers began to grade the place as (Ma-no Umi). The ship was fortunate to be found in a safe condition on 15 January. but it was revealed in the investigation done by the media that many ships had gone missing in that area for some years.

After this news, the Yokohama Coast Guard Office declared the area a Special Danger Area. After this, America’s Times introduced the incident to the people as The Devil’s Sea. He told that this was a place where 9 ships disappeared somewhere in good weather. However, two of the 9 ships went missing near Miyake Jima and Iwo Jima, about 750 miles away.

In 1974, an American writer referred to The Devil’s Sea in his book Bermuda Triangle. Writer Charles Blades claimed that between 1952 and 1954 more than 700 people died in the Devil’s Sea. With time. The events of Devil’s Sea became popular with people and since then it has been known as The Devil’s Sea.

Origin of the extrasensory myth of the Devil’s Sea

It is said that the word dragon named Dragon’s Triangle originates from the Chinese legend about dragons lying under the surface of the water.

According to these famous legends, there used to be an underwater dragon that would visit all the area Used to attack boats.

These stories were born 1000 BC These legends greatly influenced the legends and mystical stories created in the years to come.

The idea of ​​the Devil living in the sea arose among the people. Some similar stories also became popular with people living in Japan who believed that there was a devil under the sea.

Notable events of the Devil’s Sea

The events related to this region are heard that Kublai Khan, the fifth great Khan of the Mongol Empire and the grandson of Genghis Khan in history, tried to enter Japan in 1274 and 1281

But both of his efforts were deflated as he lost it to his ships and 40 thousand crew members in the Triangle area, after which he failed to invade the country.

It is believed that this was due to the typhoon that came in the area so that the Kublai Khan and his army gave up the plan to invade Japan.

The Japanese believed that it was God’s work for which they sent Typhoon to protect them from enemies. Later divers and marine archaeologists took stock of the area to get a deeper understanding of this and they found the debris of the Mongol ship there.

Especially in the 1940s and 1950s, many fishing vessels and more than five military vessels disappeared into the sea. The area was located between Miyake Island and Iwo Jima. In view of the increasing number of these incidents, Japan sent a ship named ‘Kaio Maru No.5′ to the area in 1952 to trace these incidents.

But surprisingly, this ship sent for research, also suddenly mysteriously disappeared without a trace. Although it was later traced to the wreckage, nothing was known about the people sitting in it.

Following this incident, the Japanese government declared the region dangerous for sea travel and freight transportation. Apart from this, all attempts to find out the facts behind the mystery were also completely destroyed.

The scientific explanation for the mystery of Devil’s Sea

The truth is that the Devil’s Sea is part of an active region of the Earth and therefore a lot of weather and tectonic events occur in this region. Some sailors believe that there are hot and cold currents in the region that cross these Vile Vortices. According to him, the passing of these currents creates disturbances in the electromagnetic field, causing the passing ships to become trapped and disappear.

Another scientific hypothesis comes to us about a Devil’s Sea which suggests that volcanic activity is active here. Due to volcanic eruptions, there are incidents in this area due to which ships crash or disappear.

Due to undersea volcanoes and seismic activities, marine scholars here believe that many islands in this area often disappear while some new islands appear. Another scientific research related to this field comes to us which suggests that the triangles formed in this region are the result of environmental phenomena.

Researchers argue that the presence of seabed methane hydrate is found in the original area. In such a situation, when methane hydrate gas or methane collectorate explodes, bubbles are formed on the surface of the water. This happens because methane hydrate deposits as ice under the sea and is separated from the seabed due to the explosion. These activities occurring in the sea have so much power. That they can also destroy a ship without leaving any tracks and that is probably the reason why ships completely disappear from this area.

Even though science gives many scientific bases of ships disappearing from MSC, no facts have failed to prove their point to date. In such a situation, the mystery of Devil’s Sea remains a mystery even today.