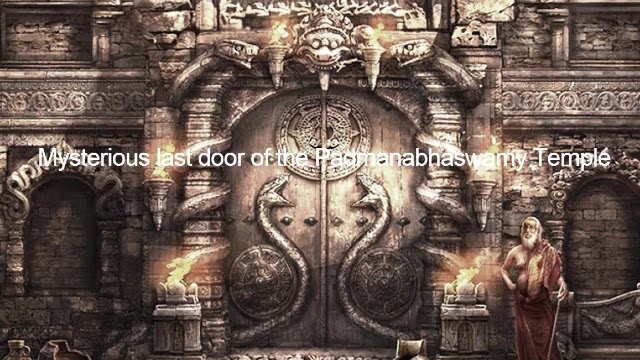 There are many such secrets hidden in this world. Which you have no idea, read this article completely because of what I am going to tell you. You will hardly believe it. The Mysterious Last Door Sri Padmanabhaswamy Temple is present in the state of Kerala, India.

This temple is one of the oldest and most mysterious Hindu temples in the world. It is the richest temple in the world, but its antiquity and greatness are not what make it special. It is actually a mysterious thing that sets it apart from the rest of the temples. Is that for decades people used to think that there is probably a lot of gold present under this temple?

The Padmanabhaswamy temple had many bold or mysterious rooms that were never opened. After the discovery, it was discovered that there were 6 volts in total, i.e. no one knew what was inside these chambers, what was the secret in these chambers. But in 2011, the Supreme Court of India ordered the opening of the chambers of this temple — after all, 5 chambers were opened.

What was found in those five chambers shook the whole world, in that chamber, there was a treasure of billions. .That people had thought exactly the same thing, the old stories that people had heard were not just stories.

The stories that people had heard of the treasure and all these things are true and after the opening of the five chambers it was in front of the eyes but one thing did you notice that only 5 chambers were open no one talked about the 6th chamber The last sixth chamber whose code name is ‘Vault B’ was also the same as the rest of the bold but it is more mysterious.

There are 2 snakes on its door and according to the people, this is a warning which says that no one should try to open the sixth door, these snakes are protecting that door but it is just the beginning but the most interesting The thing is that there is no keyhole on this door, nor is there anything with the help of which one can open this door

To date, no such person has been born in the whole world as it is required to open it and it is also said that whoever tries to open the sixth door will get a huge curse, and hence it was sealed. And nobody knows what is inside it. Some of its twist information is with the official people of the temple. Who did not give this information to anyone?

But in 1931, an attempt was made to reopen these chambers once again and 1 Chamber was successfully opened and a lot of gold came out of that chamber. This actually meant that the first chamber was only opened in 1931, but it could not open the other rooms. Nobody knows the reason why they could not open the rest

In 1908, a flock of cobras surfaced, but the cobra was not encountered in 1931, so when there were no snakes this time, why didn’t they try to open the rest after opening the first door?

Some people say that whatever comes from inside is considered divine, which no human should touch, so they did not touch the rest of the Chamber and closed the First Open Chamber and that is why the temple people Draw to the fact that what is there? There is a lot of gold in this temple and due to this the government’s attention went to this temple, but in spite of so many things, it reopened 5 Chamber in 2011.

It was opened 80 years later, in 2011, as I said before. A total of 5 chambers have been opened to date, but no one has opened till the sixth date, but the question is why the cobra did not show up, just like in 1908 when they tried to open those doors in 1931 and 2011, some Why is it not even mysterious?

Due to this, the Indian Government opened the five Chamber but the Sixth Chamber remains a mystery till today. The amazing thing is that the Sixth Chamber was also trying to open the Indian government, but as many devotees were, they wanted to stop the work of the government and hence they also appeared in the court, the people associated with the temple did not want any 6th door forcefully Open

He had performed a ritual which is called ‘Dev pranam. It is believed that in Shruti, God asks himself what he wants, whether this door should be opened.

Those who performed that ritual also say that it would be very dangerous to disturb this door. If this sixth door is opened then a tsunami, catastrophe, and everything will end. What do you think the mysterious last door of Padmanabhaswamy temple should open, comment below and share this article